Both countries signed 17 accords on Saturday, including agreements on a revival of the ancient Silk Road trade route and cooperation in peaceful nuclear energy. 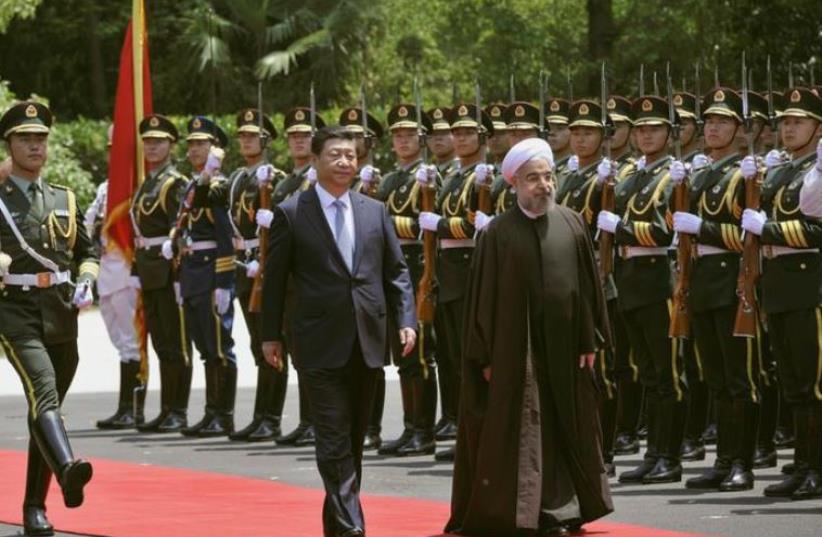 Iranian President Hassan Rouhani (R) and Chinese President Xi Jinping.
(photo credit: REUTERS)
Advertisement
DUBAI- Iran and China agreed to expand bilateral ties to form a comprehensive strategic partnership, President Hassan Rouhani and visiting Chinese counterpart Xi Jinping said on Saturday, calling it a "new season" in bilateral relations.The Chinese president is the first leader to visit Iran since international sanctions on the Islamic Republic were lifted on Jan. 16 after it struck a deal with six major powers to limit its nuclear program. China was one of the six."We are happy that President Xi visited Iran after the lifting of sanctions ... Iran and China have agreed to increase trade to $600 billion in the next 10 years," Rouhani said at the news conference with Xi broadcast live on state television."Iran and China have agreed on forming strategic relations (as) reflected in a 25-year comprehensive document," he said.Both countries signed 17 accords on Saturday, including agreements on a revival of the ancient Silk Road trade route and cooperation in peaceful nuclear energy.Rouhani said the two countries had also agreed to cooperate closely to resolve the issue of "terrorism and extremism in Iraq, Syria, Afghanistan and Yemen".Xi is the first Chinese president to visit Iran in 14 years, according to the Iranian state news agency IRNA. He has visited Saudi Arabia and Egypt as well during a Middle East tour that began on Jan. 19.He was to meet Iran's most powerful figure, Supreme Leader Ayatollah Ali Khamenei, later in the day.