Moniz to Israeli reporters: Iran deal does not change ‘one iota’ who America’s friends are

US energy secretary defined America's friends in the region as Israel, the countries of the Gulf Cooperation Council, and "a couple of Arab states." 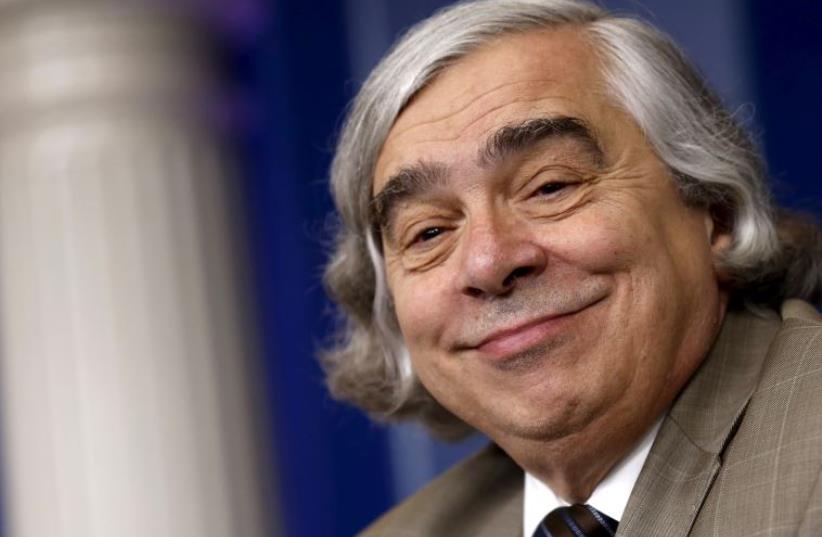 US Energy Secretary Ernest Moniz smiles as he addresses reporters during the daily press briefing at the White House in Washington
(photo credit: REUTERS)
Advertisement
WASHINGTON - Washington is not pivoting toward Iran, Energy Secretary Ernest Moniz indicated on Monday, stating that the Iran nuclear deal “does not change one iota who our friends and allies are in the region.”Moniz, speaking to a delegation of Israeli diplomatic reporters visiting Washington, defined America’s friends in the region as Israel, the countries of the Gulf Cooperation Council, and “a couple of Arab states.”Iran, he added, “does not move out of the box”  unless its support for terrorism, Hezbollah, and instability in the region, as well as its human rights record, are addressed. In addition, he said, that country’s rhetoric about Israel will have to change “dramatically.”Moniz was the highest level administration official to meet the delegation, which is staying in Washington for three days before heading to New York. The reporters are guests of the Ruderman Family foundation, which sponsors programs aimed at enhancing Israeli understanding of the American Jewish community. The visit was "initiated by the Israel Diplomatic Correspondent Association, and the meetings were set up with the assistance of the Jewish Federations of North America. "Moniz said that if he were Israeli, he would he would support the agreement. Clearly, he said, the accord is “part of a bigger issue in terms of how we are going to address our collective security requirements in the region. This is one important tool for us to do that by taking the existential threat [to Israel] off the table.”He repeated the administration's central argument that the agreement is not based on trust, but rather verification. He would not discuss the secret annexes to the accord - including one that reportedly allows the Iranians to provide their own soil samples to supervisors - saying these are agreements between the IAEA and the Iranians.“From day one and until forever, we will have greater insight and verification options with the agreement than without it,” he said, adding that “no one is in denial” that the Iranians will have additional funds to use for their subversive activities in the region, which is why the US is committed to “a significant enhancement of security collaboration in the region,” both with Israel and the Gulf states.Moniz shot down efforts to compare this deal with the one signed with North Korea in the 1990s and breached just a little more than a decade later.“The situation is night and day,” he said. “In North Korea there was limited IAEA access” to both declared and undeclared nuclear facilities. By contrast, he said, there is “no example anywhere short of military occupation” on an agreement allowing more access.Regarding Israeli claims that Iran will effectively have up to three months - and not just 24 days - from the time supervisors want access to an undeclared site until the time that access is actually granted, Moniz said that if Iran does not provide access after about a month after asked to do so, they would be “in material breach of the accord."In that scenario, he said, a dispute resolution process in the UN Security Council could be set off, which is an additional two months.“But they are in breach right from the end of that 24-day period, and then the P5+1  will decide what it wants to do,” he said.The US would then be free  “to take the actions that we choose to take,” one of the options being to annul the agreement, he said.Moniz said that there is currently a lot of emphasis on Iran’s becoming a nuclear threshold state under this agreement in 15 years.“But there is a lot less emphasis on the fact that they were a nuclear threshold state before these negotiations started,” he said, adding that the Iranians now have 10-12  weapons' worth of highly enriched uranium, 98 percent of which will be eliminated under the deal.