Report: Iran deploys Hezbollah to get its old ally Hamas back

New mediation comes after Iran failed in its previous attempts to convince Hamas to announce its support for Iran in the Islamic Republic’s battle with Saudi Arabia for regional supremacy. 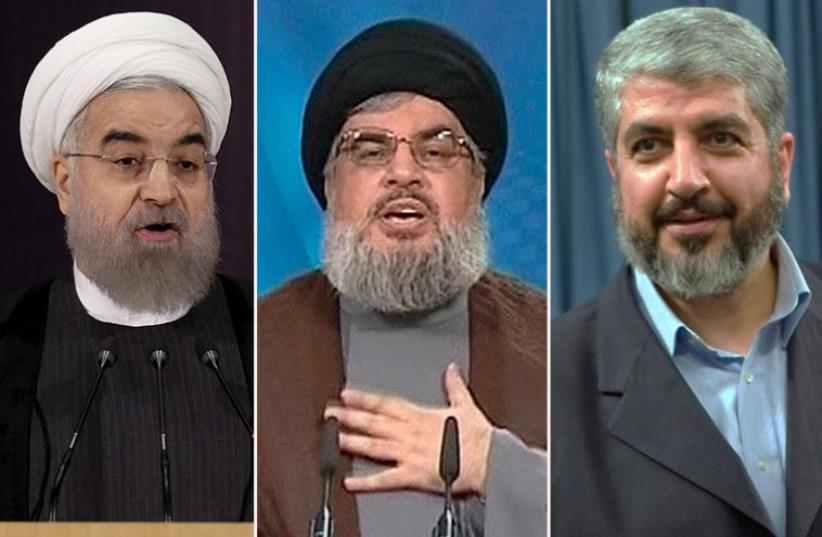 Rouhani Nasrallah and Mashaal
(photo credit: REUTERS)
Advertisement
Hezbollah is expected to start mediating soon between Hamas and Iran in order to reconcile between both parties and bring Hamas, which is financed today buy the Gulf states, back into Tehran's fold.London-based Asharq al-Awsat reported on Thursday that the new mediation comes after Iran failed in its previous attempts to convince Hamas to announce its support for Iran in the Islamic Republic’s battle with Saudi Arabia for regional supremacy, in exchange for Iranian financial aid.According to the report, Naim Qassem, the deputy secretary-general of Hezbollah, has invited the deputy chairman of Hamas' political bureau, Mousa Abu Marzouk, to Lebanon to meet senior Iranian officials, including officers in Iran's Revolutionary Guard.The reported meeting is expected to take place after the end of reconciliation talks between Hamas and Fatah that will start in Doha in February.Although it is desperate for money, Hamas will not easily relinquish its alignment with Saudi Arabia and take Iran's side. Doing so will paint Hamas in the Sunni world as a traitor that collaborates with a regime which is accused of starving Syrian children to death. The head of Hamas' political bureau, Khaled Mashaal, has rejected Iran's demand that Hamas side with the Islamic Republic at the expense of Sunni states in order to receive financial support, especially after Iran has ceased financing its biggest supporter in Gaza, the Islamic Jihad.While Hamas needs Iran's money, Iran strives to increase its dominance in the Middle East, especially as tensions with Saudi Arabia run higher, and improving its relations with Hamas can help it maintain its presence in the Palestinian territories.