Columnist praises Netanyahu for leading charge to sanction Iran, but criticizes him for his "reckless spat with Obama." 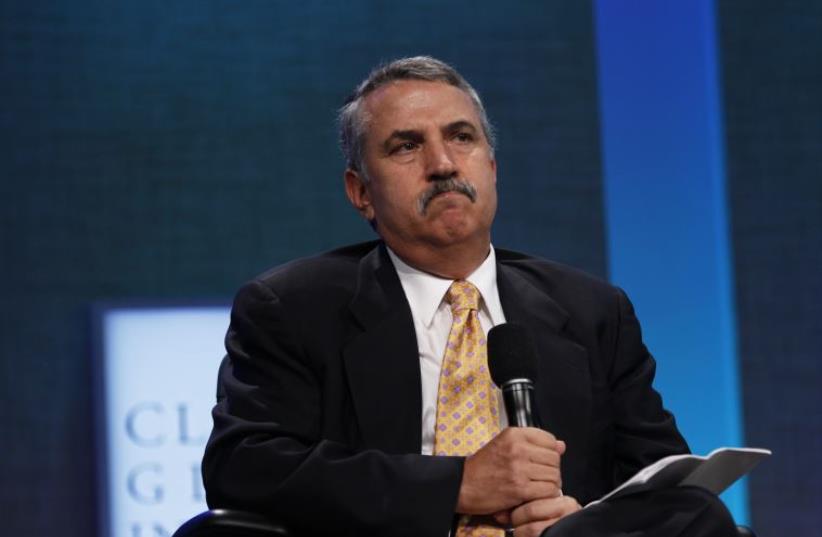 Thomas Friedman
(photo credit: REUTERS)
Advertisement
Influential New York Times columnist Thomas Friedman issued grades to the key players in the Iran nuclear deal in his Wednesday column, issuing Prime Minister Benjamin Netanyahu a Grade C.Friedman, a frequent critic of Netanyahu, gave the prime minister credit for getting the world to impose sanctions on Iran, but took him to task for butting heads with US President Barack Obama over the deal."His reckless spat with Obama, which went beyond substance to openly endorsing Obama’s G.O.P. rivals and colluding with G.O.P. House leaders to address Congress — without the president’s support — hurt him, Israel and the deal," Freidman argues."Had Bibi hugged Obama, he could have made Israel effectively the sixth party in the P-5 side of negotiations with Iran and stiffened every spine. Instead, Netanyahu marginalized Israel," he added.Friedman warned that Netanyahu would lead Israel "into a permanent, corrosive occupation of the West Bank, make support for Israel an increasingly Republican cause and lose the next generation of American Jews.”The New York Times' columnist gave Iranian Supreme Leader Ayatollah Ali Khamenei a Grade A for getting his country out from under sanctions while maintaining his hardline image in Iran, but warned of the consequences of not making any "transformation in domestic politics."Friedman gave Obama a Grade I, for incomplete, saying that only history could tell if the deal is a success.He preserved his worst grade, an F, for former US vice president Dick Cheney for his criticism of the deal. He rejected Cheney and other Republicans' assertion that Obama had made the US look weak in the eyes of Iran, hurting Washington's negotiating position."Republicans, and Cheney personally, played a big role in the loss of US credibility to threaten Iran with force," he stated. "Dick has a problem telling the truth, and he’s not alone. Some G.O.P. critiques of this deal should be looked at, but they’ll never be taken seriously if the party isn’t straight about its own role in our loss of deterrence vis-à-vis Iran.”