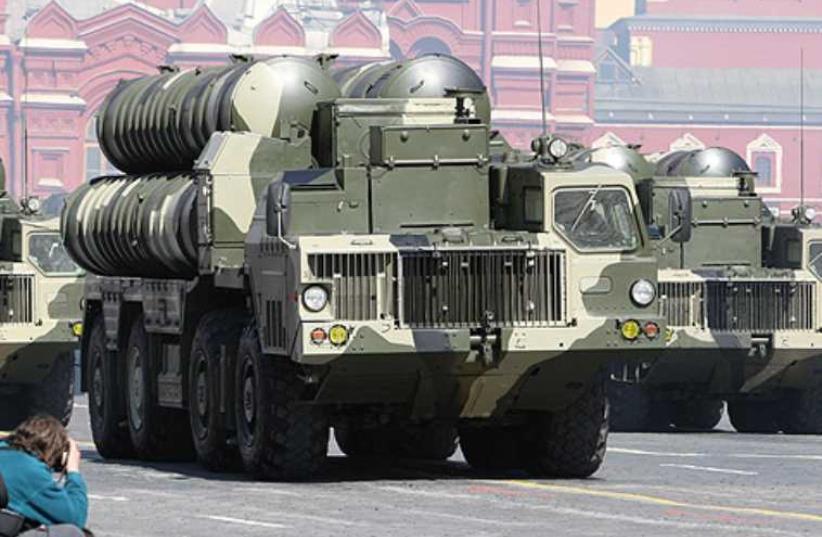 S-300 anti-aircraft missile system at a parade in Moscow
(photo credit: WIKIMEDIA COMMONS/WWW.KREMLIN.RU)
Advertisement
Russia will send the first S-300 air defense missile system to Iran on Thursday, Russia's RIA state news agency reported on Wednesday quoting an unidentified source.The missile system will be delivered under the terms of an earlier contract. RIA reported earlier on Wednesday that Russia will sign this year a contract with Iran to supply a batch of its Sukhoi Su-30SM multi-role fighter jets to the Islamic Republic. The report  quoted a senior official at Russia's arms export agency as saying.Iranian Defense Minister Hossein Dehghan is visiting Moscow this week. He met the Russian President Vladimir Putin on Tuesday, the Kremlin said, giving no further detail.Russia canceled a contract to deliver the S-300 advanced anti-missile rocket system to Iran in 2010 under pressure from the West following UN sanctions imposed on Iran over its nuclear program.Tehran agreed to the deal on curbing its nuclear work in July last year and international sanctions were lifted in January. But tensions with Washington have remained high as Tehran continues to develop its military capabilities