Constructing a plastic replica of the al-Aksa Mosque and Dome of the Rock, Iranian media reports tens of thousands of soldiers staged exercises dubbed 'Towards the Holy City." 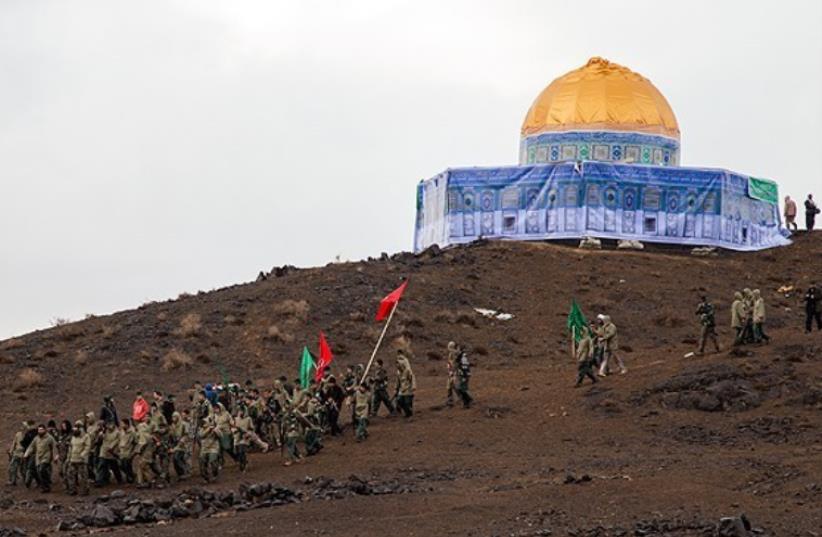 (Fars News Agency)The Fars report added that the drills involved over 120 Basij battalions, in which fighter-jets bombed targets in the dessert and dozens of gun-wielding squadrons representing IDF soldiers guarding the shrine replica.Fars quoted one Basij commander as saying the drills were organized "to exercise preparedness to fight against possible threats in the region.”
(Fars News Agency)Basij fighters are a volunteer arm of Iran's Islamic Revolutionary Guards Corps and have been arriving in Syria to reinforce Syrian government troops in an offensive in the contested northern city of Aleppo and other insurgent-held areas.Last month, Iran held a public funeral for one Basij senior paramilitary fighter after he was fatally wounded in battle in northern Syria.
(Fars News Agency)Nader Hamid died in a Syrian hospital last week of gunshot wounds sustained in a gun battle, Iranian agencies reported.


(Fars News Agency)Iran says it has military advisers and volunteers in Syria but denies having a conventional force on the ground and says it is supporting the Syrian army against Islamic State insurgents. Russia, which is carrying out air strikes with Syrian-based jets, says the same.