President hosts delegation of Democrats from the US Congress. 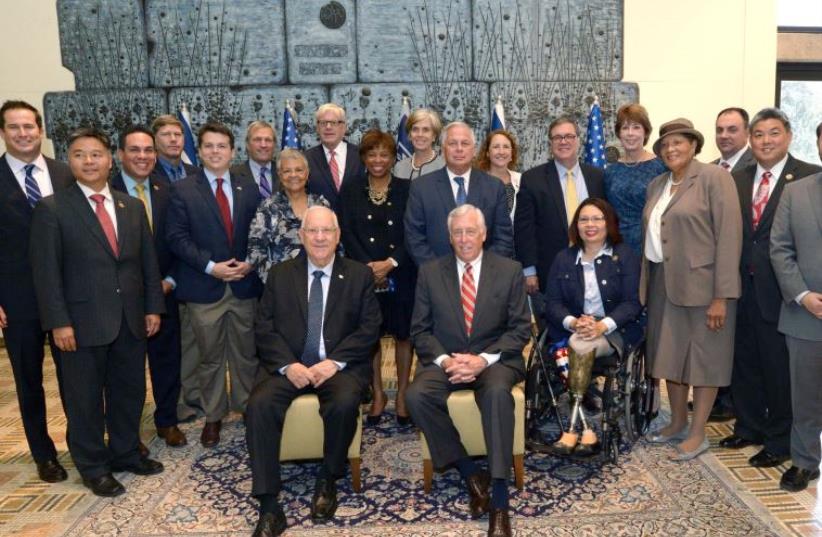 President Reuven Rivlin hosts delegation of Democrats from US Congress in 2015
(photo credit: Mark Neiman/GPO)
Advertisement
Regardless of the outcome of the Congressional vote on the Iran deal or Joint Comprehensive Plan of Action as it is officially known, whatever Congress decides, the strategic alliance between Israel and the United States will remain intact and grow even stronger, President Reuven Rivlin told a 23 member delegation of Democrats from the US Congress on Wednesday.Rivlin said that together with Israelis from all sides of the political spectrum, he was deeply concerned about the recent nuclear deal signed with Iran because the current Iranian regime acts with “a dangerous combination of aggressiveness, fundamentalism and state supported terrorism” which even without nuclear weapons threatens freedom and democracy in the region and around the world.  “We fear that this agreement is a first step to legitimize Iran’s polices and strategies which will lead to acts that will further destabilize an already chaotic region and the whole world,” said Rivlin.Even if the deal goes ahead it does not leave Israel defenseless, Rivlin was quick to assert.  “As a strong democratic country in the region, Israel will do all that is necessary to defend itself.  In this crucial time all Israelis know that Israel does not stand alone.  Our allies and specifically the US – are a strategic cornerstone for us – and we know that very well.  The US-Israel relationship has had its ups and downs, and we must not be alarmed by disagreements when they come up.”Rivlin repeatedly emphasized the historical alliance and strong bonds of friendship between the US and Israel in the course of his address. The delegation was led by Representative Steny Hoyer of Maryland, for whom this was the 15th visit of this kind in three decades.The members of the delegation represented not only constituencies from north to south and east to west, but also a large swathe of America’s ethnic mosaic.  The Representative whom came the furthest distance was Mark Takai from Hawaii. In introducing members of the delegation to Rivlin, Hoyer made particular mention of Tammy Duckworth of Illinois, a former helicopter pilot who was hit by an RPG. “It hasn’t slowed her up a bit,” he said.  “She’s extraordinary.”In introducing Rivlin, Hoyer also referred to Rivlin’s predecessor Shimon Peres, who he described as “one of the great wise men of the world.” Hoyer said that Israel was fortunate in having two good and decent men back to back who spoke of the best values of their country and the United States.“We come every two years as a reaffirmation of the unbreakable bond that exists between Israel and America, even though there are differences between our two leaders on a very important issue,” he said.Addressing Rivlin personally, Hoyer said in reference to Rivlin having been elected to office by members of the Knesset when he himself was an MK: “When you are elected by people with whom you served, it is a testament to your character and fairness and their trust in your leadership.”Relating to the murders by Jews last week of ‘teenager Shira Banki and Palestinian toddler Ali Dawabshe, Hoyer said that Rivlin had demonstrated his leadership. “You did not hesitate to speak up and speak out.”