"The United States is deeply concerned about Iran's recent ballistic missile launch," US Ambassador to the United Nations Samantha Power said in a statement. 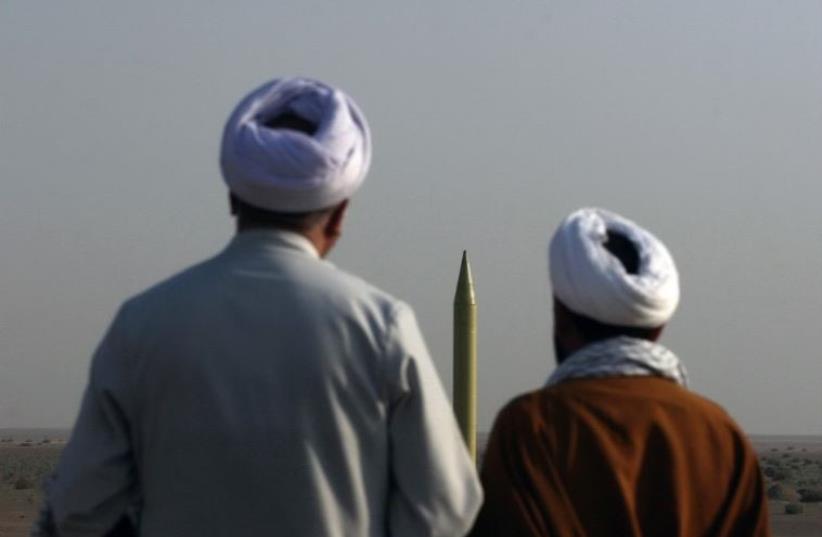 Iranian clerics look at a ballistic missile Shahab 1 before being launched during the second day of military exercises
(photo credit: AFP PHOTO)
Advertisement
The United States has confirmed that Iran tested a medium-range missile capable of delivering a nuclear weapon, in "clear violation" of a United Nations Security Council ban on ballistic missile tests, a senior US official said on Friday."The United States is deeply concerned about Iran's recent ballistic missile launch," US Ambassador to the United Nations Samantha Power said in a statement."After reviewing the available information, we can confirm that Iran launched on Oct. 10 a medium-range ballistic missile inherently capable of delivering a nuclear weapon," she said. "This was a clear violation of UN Security Council Resolution 1929."The United States is preparing a report on the incident for the Security Council's Iran Sanctions Committee and will raise the matter directly with Security Council members "in the coming days," Power said.Council diplomats have told Reuters it was possible to sanction additional Iranian individuals or entities by adding them to an existing UN blacklist. However, they noted that Russia and China, which have opposed the sanctions on Iran's missile program, might block any such moves."The Security Council prohibition on Iran's ballistic missile activities, as well as the arms embargo, remain in place," Power said. "We will continue to press the Security Council for an appropriate response to Iran's disregard for its international obligations."Ballistic missile tests by Iran are banned under Security Council resolution 1929, which was adopted in 2010 and remains valid until a nuclear deal between Tehran and six world powers goes into effect. Under that deal, reached on July 14, most sanctions on Iran will be lifted in exchange for curbs on its nuclear program.Once the deal takes effect, Iran will still be "called upon" to refrain from undertaking any work on ballistic missiles designed to deliver nuclear weapons for a period of up to eight years, according to a Security Council resolution adopted in July.Countries would be allowed to transfer missile technology and heavy weapons to Iran on a case-by-case basis with council approval.However, in July a US official called this provision meaningless and said the United States would veto any suggested transfer of ballistic missile technology to Iran.On Sunday, the United States, the European Union and Iran are expected to announce a series of measures to comply with the nuclear deal that will take effect once the UN International Atomic Energy Agency confirms Iranian compliance with terms of the agreement.