Obama and Stewart sat down for a lengthy conversation, beginning with Iran, for their last on-air exchange before Stewart's expected retirement in August. 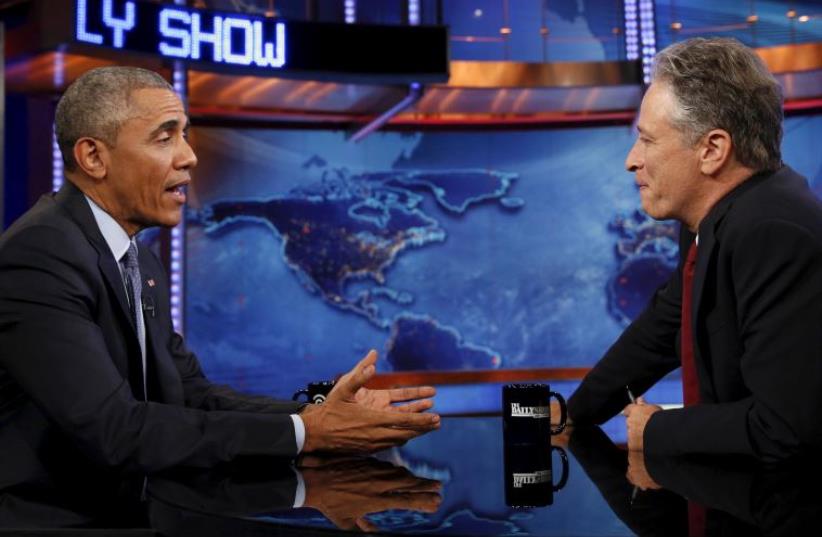 US President Barack Obama makes an appearance on The Daily Show with Jon Stewart in New York July 21, 2015.
(photo credit: MARC ISRAEL SELLEM/THE JERUSALEM POST)
Advertisement
US President Barack Obama sat down with funnyman Jon Stewart of the Daily Show Tuesday evening, where the political satirist and the leader of the free world discussed the recent nuclear agreement between Iran and world powers in the last on-air exchange between the two before Stewart's expected retirement in August. Stewart opened the show by jesting, "I'd like to begin (the show) by reciting my Haftorah...its about 29-minutes long, but it gets cooking around minute 17."Stewart then invited the 44th president of the United States onto the stage, talking at length on a wide-range of issues concerning the president's administration, beginning with Iran. "People are seeing some of the work we started way back when I first came in," the president began. "Iran, for example, we put those sanctions in and methodically built pressure on Iran over the course of four or five years to get them to the table to negotiate... and it finally comes to fruition."
The Daily Show
Get More: Daily Show Full Episodes,The Daily Show on Facebook,Daily Show Video Archive
Stewart then shot back at the president, asking a simple yet poignant question: "Whose side are we on in the Middle East?" Stewart went on to elaborate: "We're fighting with Iraqis to defeat ISIS, along with Iran, but in Yemen were fighting Iran with Iraqis and Saudis... who are we bombing?" "Right now we're going after ISIL... but with respect to Iran - look this is an adversary. They are anti-American, anti-Israel, anti-Semitic, they sponsor terrorist organizations like Hezbollah," Obama said of the Islamic Republic."Sounds like a good partner for peace," Stewart responded facetiously."Well, as has been said frequently, 'you don't make peace with your friends,'" Obama said. "The issue here is, do we want them having a nuclear weapon? The answer is no."The US Congress received the full text of the nuclear agreement with Iran on Sunday, including provisions kept secret from the public.Receipt of the agreement starts a consequential clock: As of July 20, Congress has 60 days to review the agreement, hold hearings and ultimately choose to vote to approve or disapprove of the deal. The president has the ability to override any resolution of disapproval, and Congress has the ability to vote to override his veto.Secretary of State John Kerry took to the country’s Sunday morning shows to warn of severe consequences if Congress kills the deal, formally known as the Joint Comprehensive Plan of Action.The agreement is intended to cap, restrict, monitor and partially roll back Iran’s nuclear program in exchange for sanctions relief.Washington’s historic regional allies, Israel and Saudi Arabia chief among them, have condemned the deal in the strongest possible terms. Israel is actively lobbying Congress to vote to disapprove of the agreement.Michael Wilner contributed to this report