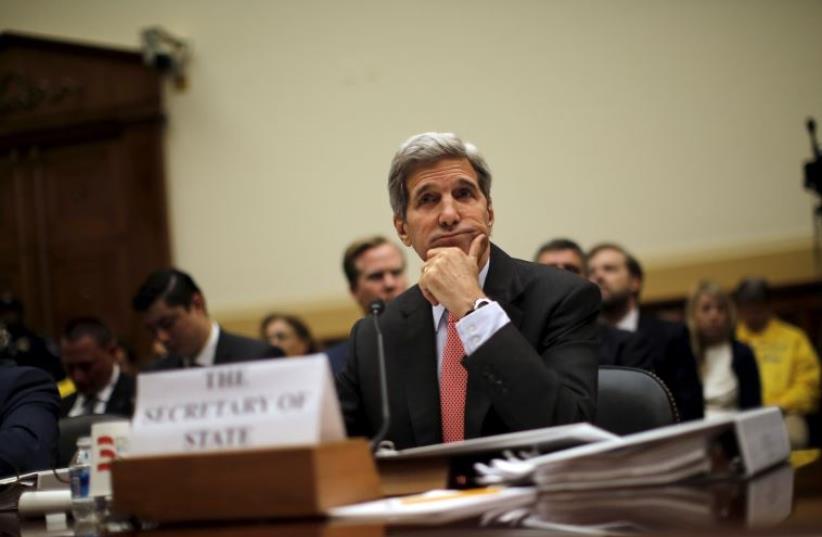 US Secretary of State John Kerry testifies before a House Foreign Affairs Committee hearing on the Iran nuclear agreement in Washington, July 28, 2015.
(photo credit: REUTERS)
Advertisement
US Secretary of State John Kerry, US Secretary of the Treasury Jack Lew and US Energy Secretary Ernest Moniz were testifying on Tuesday before the House Foreign Affairs Committee on the nuclear agreement reached in Vienna between Iran and the P5+1 nations earlier this month. Kerry said that, while he understands Israel's fears regarding the nuclear deal signed between world powers and Iran, the deal in fact makes Israel and the region safer.Tweets by @mawilnerAddressing concerns that Iran would continue to sponsor terrorism despite the nuclear deal, Kerry said that the US would continue to "push back against Iran's other activities."He said that it was "much easier to push back against an Iran that doesn't have a nuclear weapon," which he argued that the agreement will ensure.Kerry said that Washington's current level of security cooperation with Israel is unprecedented and the US will continue to maintain its "robust security presence" in the region.Congress began a 60-day review period last week, during which it may choose to vote to approve or disapprove of the deal. A resolution of disapproval would have to come to a second vote with two-thirds support of both chambers in order to overcome a presidential veto.Kerry insisted that walking away from the deal would isolate the United States."If we walk away, we walk away alone. Our partners are not going to be with us. Instead they'll walk away from the tough multilateral sanctions that brought Iran to the negotiating table in the first place," Kerry said.House members signaled the difficulties the administration will face getting Congress on board.Representative Ed Royce, the committee's Republican chairman, said the deal would provide Tehran with a "cash bonanza" while weakening Washington's ability to pressure Iran's leaders.Some Democrats were skeptical also. Representative Eliot Engel, the committee's top Democrat, said he saw a number of troublesome issues in the agreement.The administration officials insisted the deal was a better way to keep Iran from developing a nuclear weapon than more sanctions, or military action.