The weapons, allegedly found by the Iran-backed Houthis, are said to have been destined to forces loyal to Yemen's deposed president. 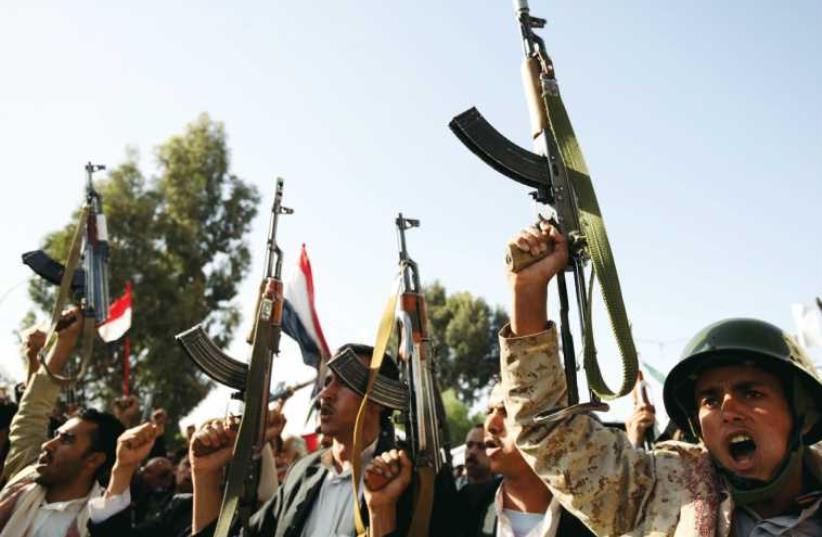 Houthi fighters raise their weapons as they demonstrate against an arms embargo imposed by the UN Security Council on the group, in Yemen’s capital of Sanaa last week.
(photo credit: REUTERS)
Advertisement
Yemen's Houthi rebels seized what they claim are Israeli-made weapons on Saturday after overrunning the Saudi embassy in the Yemeni capital of Sanaa. According to Iran's state news agency FARS, the weapons were found by the Shi'ite militants after they had routed the embassy's 40 man security team and were intended for forces loyal to Yemen's deposed president, Abd-Rabbu Mansour Hadi.Iran-backed Shi'ite Muslim Houthi fighters captured the capital Sanaa in September 2014 and ultimately seized the presidential palace in January, driving the Yemeni president and his government to resign.Hadi consequently went into exile in Saudi Arabia.Along with the discovery of Israeli weapons, FARS news also reported that documents were found indicating US plans to construct a military base in Saudi Arabia in order to monitor the Bab el-Mandab, the straits leading from the Gulf of Aden to the Red Sea. The death toll in Yemen's ongoing civil war has reached as high as 2,000, a UN report from May announced, with approximately 115 children counted among those killed since April. The fighting in Yemen is largely taking place between Saudi forces, and its Arab Sunni coalition partners, and the Iran-backed Shi'ite Houthi insurgency, which is largely in control of the country's Northwest, much of which abuts the Saudi border.