Iranian official: US will remain our enemy despite emerging nuclear deal

Iranian ground force commander says US seeks to "exploit nations and put them in chains." 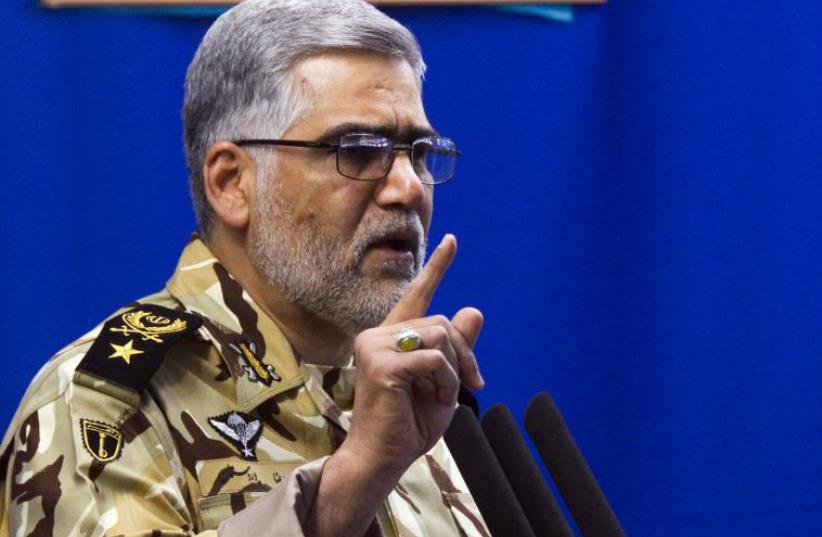 Commander of Iran's land force Ahmadreza Pourdastan
(photo credit: REUTERS)
Advertisement
A senior Iranian military official said Sunday that despite the emerging nuclear deal between Iran and the US-led P5+1 group of world powers, America will remain Tehran's enemy.Iranian Ground Force Commander Brigadier General Ahmad Reza Pourdastan said that even if a nuclear deal comes to fruition in Vienna, where Iranian and western negotiators are currently trying to reach an agreement by a Tuesday deadline, Tehran and Washington will not become friends."The US might arrive at some agreements with us within the framework of the Group 5+1 (the US, Russia, China, Britain and France plus Germany), but we should never hold a positive view over the enemy,"  Iran's Fars News Agency quoted Pourdastan as saying.
Michael Wilner reports on nuclear talks from Vienna
"Our enmity with them is over the principles and is rooted because we are after the truth and nations' freedom, but they seek exploiting nations and putting them in chains," he explained further.Pourdastan's comments came as differences still remained between the two sides over the country's disputed nuclear program ahead of Tuesday's deadline for a final agreement to end a 12-year-old dispute.The deal under discussion between Iran and the powers is aimed at curbing Tehran's most sensitive nuclear work for a decade or more, in exchange for relief from sanctions that have crippled the Iranian economy. The United States and its allies fear Iran is using its civilian nuclear program as a cover to develop a nuclear weapons capability. Iran says its program is peaceful.Washington is negotiating the deal as part of a group of major powers that also includes Britain, China, France, Germany and Russia. It is a major initiative both for the administration of US President Barack Obama and for Iran's pragmatic elected President Hassan Rouhani, both of whom face skepticism from powerful hardliners at home.Reaching a deal would be the most important milestone in decades towards alleviating hostility between the United States and Iran, enemies since Iranian revolutionaries captured 52 hostages in the US embassy in Tehran in 1979.An Iranian official told the semi-official Tasnim news agency that the talks could continue until July 9, echoing some Western diplomats. Kerry said negotiators were still aiming for the July 7 deadline, which the negotiators set when they missed a June 30 deadline last week.Kerry and Zarif held a string of meetings on Sunday, trying to overcome remaining differences, including how to lift United Nations sanctions and what advanced research and development Iran may pursue. Foreign ministers of the other powers started to return to Vienna on Sunday to help push for a swift deal.US Secretary of State John Kerry said on Sunday that reaching an agreement is possible this week if Iran makes the "hard choices" necessary, but if not, the United States stands ready to walk away from the negotiations.Reuters contributed to this report.