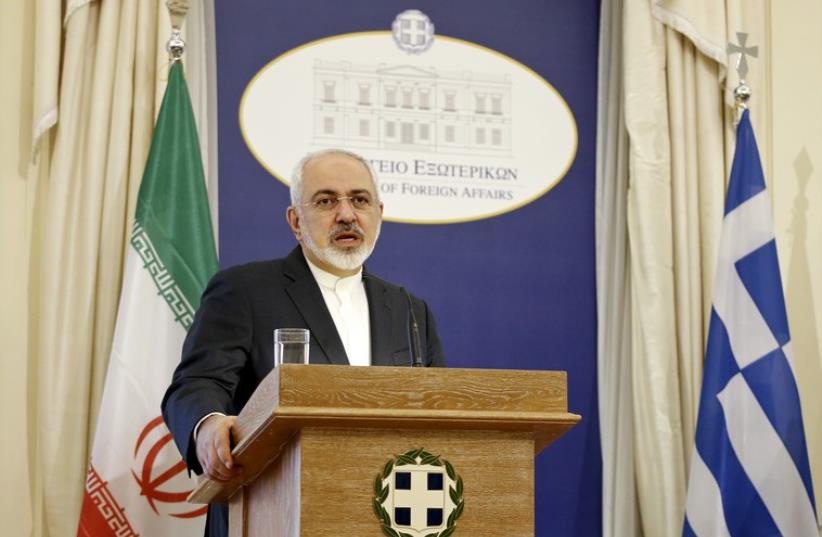 Iranian Foreign Minister Mohammad Javad Zarif addresses journalists in Athens May 28
(photo credit: REUTERS)
Advertisement
VIENNA - Iran's foreign minister said on Monday some differences still remained between Iran and six powers over the country's disputed nuclear program ahead of Tuesday's deadline for a final agreement to end a 12-year-old dispute."Still nothing is clear. . .Some differences remain and we are trying and working hard," Iranian Foreign Minister Mohammad Javad Zarif told reporters.
Michael Wilner reports on nuclear talks from Vienna
The deal under discussion between Iran and the powers is aimed at curbing Tehran's most sensitive nuclear work for a decade or more, in exchange for relief from sanctions that have crippled the Iranian economy.The United States and its allies fear Iran is using its civilian nuclear program as a cover to develop a nuclear weapons capability. Iran says its program is peaceful.Reaching a deal would be the most important milestone in decades towards alleviating hostility between the United States and Iran, enemies since Iranian revolutionaries captured 52 hostages in the US embassy in Tehran in 1979.Washington is negotiating the deal as part of a group of major powers that also includes Britain, China, France, Germany and Russia. It is a major initiative both for the administration of US President Barack Obama and for Iran's pragmatic elected President Hassan Rouhani, both of whom face skepticism from powerful hardliners at home.US Secretary of State John Kerry said on Sunday that reaching an agreement is possible this week if Iran makes the "hard choices" necessary, but if not, the United States stands ready to walk away from the negotiations.Chinese Foreign Minister Wang-Yi said an agreement was within reach: "What is important today and tomorrow (is that) all parties especially, the United States and Iran, should make their final decisions as quickly as possible."An Iranian official told the semi-official Tasnim news agency that the talks could continue until July 9, echoing some Western diplomats. Kerry said negotiators were still aiming for the July 7 deadline, which the negotiators set when they missed a June 30 deadline last week.Obama must submit the deal by July 9 in order to get an expedited, 30-day review in Congress. If it is submitted later, the Republican-led Congress would have 60 days to review it, bringing more opportunities for the deal to unravel.Kerry and Zarif held a string of meetings on Sunday, trying to overcome remaining differences, including how to lift United Nations sanctions and what advanced research and development Iran may pursue. Foreign ministers of the other powers started to return to Vienna on Sunday to help push for a swift deal.In parallel with the powers' talks, delegates from the International Atomic Energy Agency (IAEA) were due to hold talks with Iranian officials in Tehran on Monday, following a visit from the body's chief Yukiya Amano last week.The powers want Iran to grant more access to IAEA inspectors and to answer its questions about previous nuclear work that may have had military purposes.