Is an increasingly powerful Iran trying to make northern Iraq part of its ‘Shi’a crescent’?

With each round of fighting, Iran seems to grow stronger, as it has in Syria and Lebanon, with its proxies or affiliates becoming part of the government. 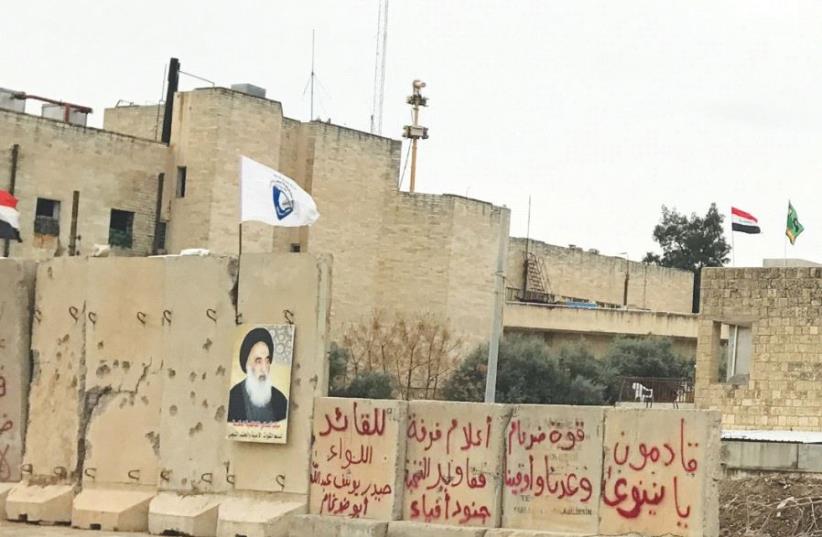 POSTERS ACROSS northern Iraq celebrate Shia religious figures; many see them as symbols of Iranian influence stretching across the region
(photo credit: SETH J. FRANTZMAN)
Advertisement
HAMAM AL-ALIL, Iraq – The entrance to a refugee camp in Hamam al-Alil in northern Iraq is not what you’d expect. Instead of welcoming civilians fleeing fighting in Mosul, it is festooned with checkpoints manned by members of the Popular Mobilization Units, Shi’a militias that are often called Hashd al-Shaabi.Most of the men checking cars are young, some of them sport ski masks emblazoned with white skulls similar to the symbol of the Punisher, like a creepy costume. Flags for their various Shi’a units flap in the wind alongside other flags that announce devotion to the imam Hussein, a central figure in Shi’a Islam.The Sunni Arab civilians in northern Iraq today are shattered and broken. Their lands are occupied by the militias. In some ways this landscape reminds us of the Second World War, when the avenging Red Army swept across Germany.Many Sunnis in northern Iraq welcomed Islamic State in 2014, and some of them carried out unspeakable crimes, selling Yazidi women, burning people, beheading people, lashing women who didn’t dress “correctly.”But the militias say something else. They tell you who is in power. And when you look closely at the checkpoints, it isn’t just the soft face of Hussein on the flags; there are posters of the supreme leader of Iran, Ali Khamanei.Iran is in northern Iraq. The question locals are asking is whether it is here to stay.In conversations with officials, experts and academics in northern Iraq and in the Kurdish autonomous region, many expressed concern that when the war with Islamic State is over, parts of northern Iraq will be fastened onto a “Shi’a crescent” that stretches from Tehran to the Mediterranean via Syria.Over the last years, as this theory has been put forward, it seemed far-fetched. Why does Iran need a land corridor when it can fly weapons directly to Damascus and transport them to Hezbollah? What is at stake for Iran in northern Iraq may not be the physical need to have a land corridor, but the strategic need and the influence-peddling that Tehran wants to carve out, which would result in the permanent presence of Iranian-allied groups.To understand this, we need to recall that the Sunni heartland of Iraq stretches north and northwest of Baghdad. This is where Saddam recruited the officers for his Republican Guard, the men who fought the war against Iran in the 1980s. This is where Saddam experimented with ethnic cleansing and Arabization, gassing Kurds, destroying thousands of Kurdish and Yazidi villages, confiscating Assyrian Christian lands and giving them to loyal Sunni Arabs.After 2003, the situation was suddenly reversed. Sunni Arabs were a minority in a democratic Iraq in the making, Kurds gained freedom, and members of Shi’a political parties exiled in Iran came to Baghdad. By 2014, when Islamic State arrived in Mosul, Iran was nearing the height of its power in Iraq.Where Kurds had been a check on Saddam’s Arab nationalism, today Iran views Kurdish aspirations and power (Kurds are mostly Sunni) as a threat to Iranian supremacy in Baghdad.Kurdish worries about Iran’s goals in Iraq point to the Sinjar Mountains, the massif that is 74-km. long and 13-km. wide near the border with Syria. It was to these mountains that Yazidis fled from Islamic State. Some of those Yazidis joined the Sinjar Resistance Units, which are allied with the Kurdistan Workers Party (PKK) and People’s Protection Units in Syria. None of these groups are Shi’a or particularly pro-Iran, but they have clashed with the Kurdish Peshmerga and contested the future of the area of Sinjar.The Iranian regime-run Press TV claimed on March 3 that “Turkey-backed Kurds clash with PKK branch in Northern Iraq.” Kurdistan24 responded on March 5 with a report quoting a Peshmerga commander: “PKK aligned with Iran, Syria to complete Shi’a crescent.”The Sinjar region is strategic. In the 1980s Saddam Hussein considered using it as a site for his “superguns” which he told designers he would fire at Israel. He also stored and tested Scud missiles there. Before 2014 the area was a major transit point for jihadists traveling from Syria to Iraq to support the insurgency against the US and against the Iraqi central government. These insurgents formed the backbone of extremists who built the foundations of Islamic State, which carried out its genocide of Yazidis in Sinjar.The Shi’a militias, many of which are closely allied to Iran, control much of the landscape now in the areas around Mosul, including stretching west around Tal Afar and into Sinjar. When Islamic State is defeated, they will seek to expand their influence all the way to Syrian border, and they will link Shi’a communities along the way.Martin Chulov of The Guardian wrote last year that “Iran is now closer than ever to securing a land corridor that will anchor it in the region.” But the corridor or talk of a pipeline is a bit premature. The real threat is the slowly creeping power of Iranian hegemony, the chaotic, ineffective and extremist Sunni opposition which gives it an excuse to continue growing, and the chance that its Shi’a militias in Iraq will provoke a new cycle of fighting.With each round of fighting, Iran seems to grow stronger, as it has in Syria and Lebanon, with its proxies or affiliates becoming part of the government, slowly changing demographics and frustrating aspirations of other polities, such as the Kurdish Regional Government, Syrian rebels and anti-Hezbollah parties in Lebanon.This matters to Israel, which Iran views as one of its major opponents. Jerusalem should pay attention to the Shi’a flags fluttering in northern Iraq.