The Assyrian Monitor for Human Rights said the captives had been returned to the town of Tel Tamer and that they were in good health. 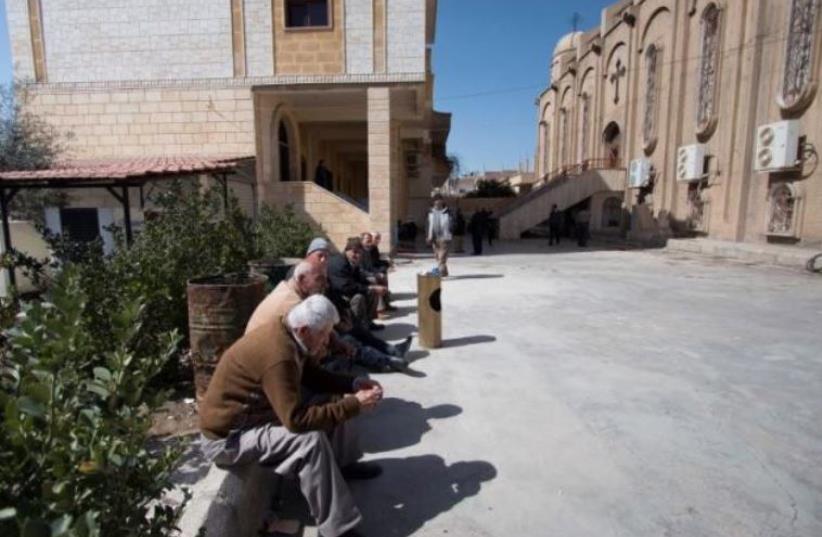 Displaced Assyrians, who fled from the villages around Tel Tamr, gather outside the Assyrian Church in al-Hasaka city, as they wait for news about the Assyrians abductees remaining in Islamic State hands, March 9, 2015.
(photo credit: RODI SAID / REUTERS)
Advertisement
Islamic State has released 37 Assyrian Christians who were among about 200 seized by the militants in February in northeastern Syria, two human rights monitoring groups said on Saturday.Elders from Arab tribes had mediated with the jihadists for their release, the Britain-based Syrian Observatory for Human Rights said.According to another human rights watchdog, The Assyrian Monitor for Human Rights, the group of freed Assyrian Christians included 27 women and 10 men, most of them elderly, a report by AFP added.Since then, a small number of the captives have been released, with between 140 and 150 believed to still be held by ISIS, said AFP.The Assyrian Monitor for Human Rights said the captives had been returned to the town of Tel Tamer and that they were in good health. It posted a picture showing several people including one woman, who was weeping.The hardline Sunni Muslim militants have now released 88 from the original group, it said in a statement on its Facebook page, and negotiations were continuing to secure the freedom of the remaining 124.They were captured during battles with the Syrian Kurdish YPG militia when Islamic State fighters overran more than a dozen villages inhabited by the ancient Christian minority near the Syrian city of Hasaka, close to the Iraqi border.Islamic State fighters killed three of the Assyrians last month, according to the two monitoring groups.Jpost.com staff contributed to this report.