ISIS has been defeated in Mosul, but is the victory a hollow one?

The Iraqi army and government have declared victory in liberating Mosul from ISIS, but members of the group still remain in the city. 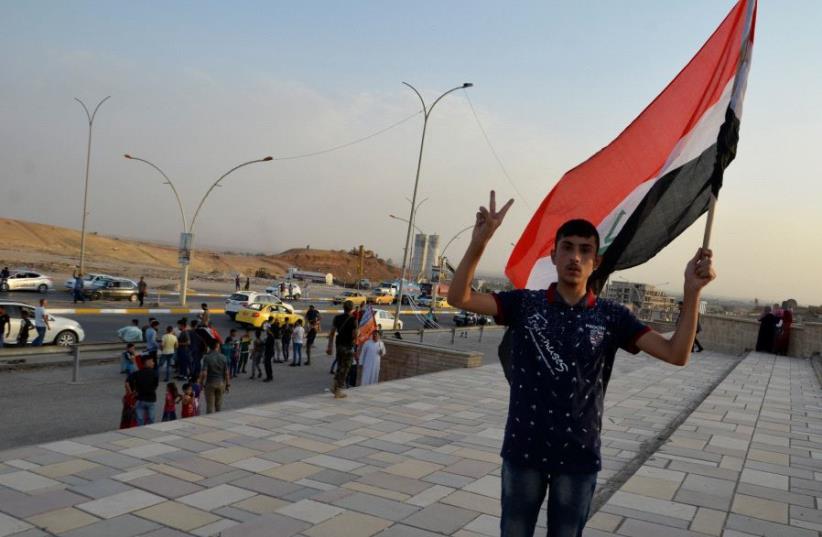 An Iraqi man waves his naitonal flag in the newly liberated city of Mosul, July 9
(photo credit: REUTERS/STRINGER)
Advertisement
Iraqi Prime Minister Haider Abadi flew to Mosul on Sunday to declare victory over Islamic State in the massive battle for one of Iraq’s largest cities.Mosul was the capital of ISIS in Iraq and the site of many of its crimes. After most of a year fighting for the city, the Iraqi government is in charge once again.
Iraqi forces celebrate in Mosul as military says “victory” is imminent (credit: REUTERS)
Three years after ISIS took over the city, it seems a melancholy victory. Mosul was the center of jihadist extremism, the selling of women, genocide, persecution of minorities, the place where Abu Bakr al-Baghdadi declared his imperial ambitions in 2014.For those on the front, the victory of course is not hollow.In Mosul, Iraqi soldiers in their dusty desert camouflage celebrated, crowds waved flags, with some holding upsidedown the ISIS emblems they had captured.“Iraqi army are happy,” wrote one observer on social media.In Baghdad, a woman watching the victory tweeted “lovely celebrations happening now.”The Iraqi victory in Mosul has echoes of the Soviet Great Patriotic War against Nazism, Iraqis rushing to the Tigris River waving their nation’s flag reminds us of the Soviet soldiers atop the Reichstag.There is one problem: Mosul has fallen but ISIS is still there.First, there are still some ISIS members holding out in Mosul.On June 26th, days after ISIS had blown up the grand Nuri mosque, it attacked neighborhoods in western Mosul that had already been liberated. On July 7th, ISIS attacked the village of Imam Gharbi near Qayyarah, which is south of Mosul, where they killed two journalists and kidnapped locals. On July 9th, they still controlled part of the village.So, was the “defeated” ISIS was able to grab a village just a handful of kilometers from the massive Iraqi Army and US base at Q-West, or Qayarrah, which was liberated months ago? Yes.Even today, as celebrations continue in Mosul and Baghdad, commanders are discussing how to liberate Hawija, an ISIS pocket west of Kirkuk that is home to several hundred thousand people. And the Iraqi army has to figure out what it will do with Tal Afar, a Turkmen town run by ISIS that is strategically located near the Turkish border and next to Kurdish Peshmerga positions northwest of Mosul. Baghdad has to decide when to unleash the Hashd al-Shaabi, its powerful Shia militias, to retake parts of Anbar Province, which the militias have been eyeing since capturing Ba’aj on June 4.They want to retake the whole area of the Syrian-Iraq border, which is still controlled by ISIS.There is no doubt the liberation of Mosul is important and symbolic. Baxtiyar Goran, a journalist at Kurdistan 24, reminded readers on Twitter that it took ISIS a “few hours to control Mosul as Iraq forces fled in face of 200-300 terrorists. It took 8 months for caliphate to fall,” referring to the length of the Mosul operation.What’s to stop several hundred terrorists from re-appearing? An interview with the former preacher at Nuri Mosque at Rudaw revealed how most of the population supported the extremists. They had various excuses, such that they were abused by the central government. Will they feel less abused after a few months of Iraqi soldiers and Shia militias patrolling the streets? If the recent ISIS attacks west of Mosul and in Imam Gharbi tell us anything, it is that terrorism will return. The city is shocked into defeat, but it is also gutted, its libraries burned and monuments destroyed by ISIS. Who is going to rebuild that, along with the infrastructure ruined by the fighting? In Fallujah, liberated in June 2016, bodies are still being found and, according to a recent visit by Judit Neurink, children were being injured weekly from unexploded ordinance left behind by ISIS. Fallujah is evidence of what lies ahead in Mosul.The smoke from battle is clearing, but the rebuilding, the tensions, the new accusations of government abuses of the locals, new extremism, will come back in the usual cycle that has played itself out in Mosul twice since the 2003 US-led invasion of Iraq.