"One mother told the agency she had had to watch as her 12-year-old son was killed in this way close to where she was hiding with her other children." 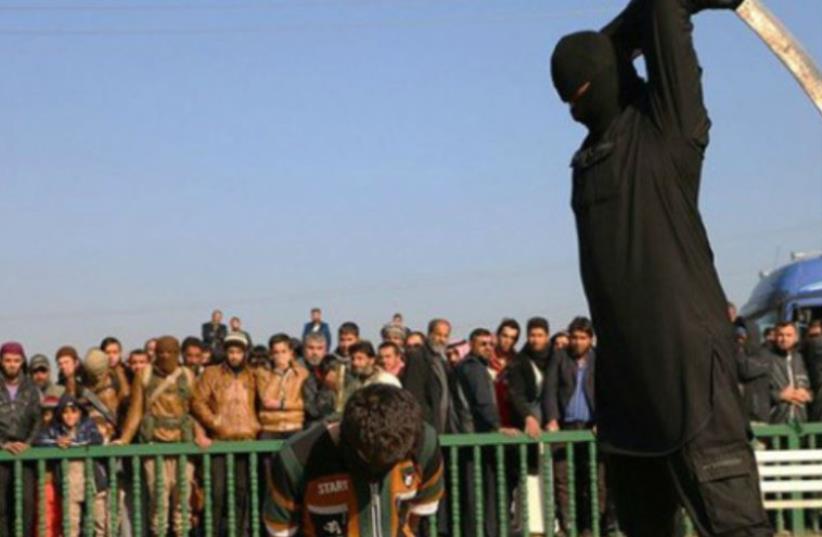 ISIS fighter beheading boy, 16, in Syria
(photo credit: ARAB MEDIA)
Advertisement
ISIS-linked extremists are reportedly beheading children in Mozambique, the BBC claimed on Wednesday.The global jihadist movement has largely been defeated in the Middle East, but the genocidal Islamist extremism that it once sought to bring to Iraq and Syria is now being carried out in areas in Africa. For many years, various groups linked to Al Qaeda or Islamist extremists percolated across the Sahel and in Somalia. They have now spread down to Mozambique and its Cabo Delgado region. When claims of ISIS extremists infiltrating and taking root in Mozambique first appeared years ago, some scoffed at the notion. This was the same narrative that cast doubt on Boko Haram in Nigeria. In 2012 an article at The New York Times claimed that there was no proof that a “well-organized, ideologically coherent terrorist group called Boko Haram even exists.” But exist it did – and within two years it was not only murdering thousands but was kidnapping women and children, much as ISIS did in Iraq. Soon it had pledged allegiance to ISIS.  Experts across the Sahel and Central Africa, most of them European, tend to see the conflicts as linked to economic or “tribal” issues and try to deny that religion plays a role. This is because of the usual tendency to turn ISIS-linked groups into “militants” or “insurgents,” despite methods like beheading and targeting of religious non-Muslim minorities that are more similar to the methods of the Nazis than insurgencies.  It now appears that the ISIS-linked group in Mozambique, called “Al-Shabab” like a similarly named group in Somalia, is involved in the beheadings of children. Aid agency “Save the Children” has said that the beheadings have taken place, the BBC reported Wednesday. “One mother told the agency she had had to watch as her 12-year-old son was killed in this way close to where she was hiding with her other children. More than 2,500 people have been killed and 700,000 have fled their homes since an Islamist insurgency began in 2017,” the reports say. The reports do not say why people are being beheaded. Boko Haram has targeted Christians and also Muslims in mosques in its campaign. ISIS also slaughtered Sunni Muslim Bedouin tribes and massacred Shi’ites before it turned its attention to ethnically-cleansing Christians and genociding Yazidis. The overall context of the beheadings may be hidden by organizations and media that have an interest in not wanting the conflict to be perceived as “religious,” because of the need to pretend it is largely just economics that drives the brutality. The use of beheading tends to be a religious motif of Islamist groups, a stylized method of killing “infidels.”  THE BBC notes that the United Nations special rapporteur on extra-judicial executions described the militants' actions as "cruel beyond words." The narrative of others is that ISIS has “exploited” a local “insurgency.” As the BBC notes: “Some analysts believe the insurgency's roots lay in socio-economic grievances, with many locals complaining that they have benefited little from the province's ruby and gas industries.” It is unclear why beheading children would help economic “grievances.” However, in Iraq in 2014 we were also told that ISIS was genociding poor minorities because ISIS members, many of them from wealthy countries in Europe, were “disenfranchised.” For instance, one leader of a “human rights” group in the West noted on June 11, 2014, that ISIS in Iraq had “reportedly tried not to alienate local population” and accused the Iraqi government of "sectarian repression." ISIS drove millions from their homes, systematically executed thousands of Yazidis and kidnapped and sold into slavery Yazidi women and children. It was unclear how committing genocide is not an act of alienating local people. As with Mozambique, lack of information about the true beliefs of ISIS members and their world view and tactics led to false reports about what they were doing. It is not clear if the full details about what is happening in Cabo Delgado will reveal a conflict that could impact the wider region, or whether the beheadings and murders will remain confined to the area. A relatively weak security infrastructure has led to reports that military contractors or “mercenaries” are being hired to fight the extremists.  In February, an Italian ambassador was killed in an unrelated conflict in the Congo. France is involved in a wide-ranging battle against extremists in the Sahel. This week armed men murdered 58 people in Niger, in another atrocity that went largely unnoticed. Reports at The New York Times and Vice say that South African and American “mercenaries” are involved. Some claim these fighters are also committing abuses. Considering the COVID-19 pandemic and other reasons that lead countries not to care about what happens in swaths of Africa, the conflict may continue until it threatens a regional capital.