If Islamic State had simply stuck to its Middle Eastern battles, it likely would have avoided a major Western military escalation. 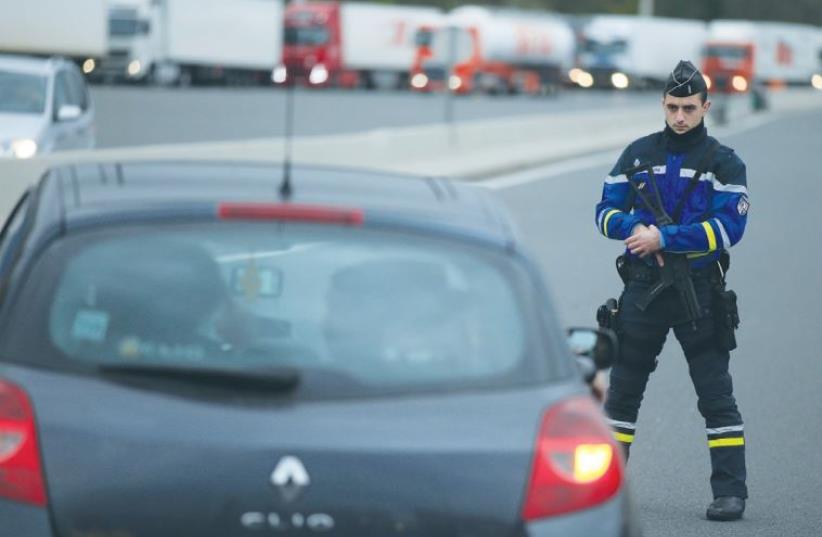 A FRENCH GENDARME stands along the road as he checks vehicles and verifies the identity of travelers on the A1 motorway
(photo credit: REUTERS)
Advertisement
Islamic State made a grave strategic error by attacking the heart of Western civilization in Paris, which undoubtedly will provoke a fierce Western military response that could devastate the group.If Islamic State had simply stuck to its Middle Eastern battles, it likely would have avoided a major Western military escalation.
Obama rules out U.S. troops on the ground to fight ISIS
Al-Qaida’s 9/11 attack against the US evoked a ferocious response, leading ultimately to the death of its leader, Osama bin Laden, and scattering its remaining members into hiding across the globe. While the group was never totally defeated, it was greatly debilitated.Islamic State is set to face a similar onslaught that will remove its hold of swaths of territory in Iraq and Syria, and depending on Western resolve, possibly also in strongholds in weak states such as Libya and Nigeria.Jihadist groups are not as disciplined and pragmatic as other Islamist movements such as the Muslim Brotherhood, its Palestinian branch Hamas, or Turkey’s AKP-led government, all of which condemned the Paris attacks.
Paris the day after: Reflection of a Jewish youth leader
However, they all, for example, have no problem with the targeting of Israeli civilians by Hamas.Their ultimate goal of building a caliphate to conquer the world may be the same as that of Islamic State or al-Qaida, but their methods to reach it are more complex and play along with the existing international order.Ely Karmon, senior researcher at the Institute for Counter-Terrorism at the Interdisciplinary Center Herzliya’s Institute for Policy and Strategy, told The Jerusalem Post that it appears Islamic State has changed its strategy.Karmon cited the claimed Islamic State bombing of a Russian passenger jet in Egypt last month, which shows that the group is coordinating between people on the ground and its stronghold in Iraq and Syria.The Israeli terrorism expert attributes the attack against the West as a sign that the group is under growing pressure on its home base, not only by the US coalition and by the Shi’ite axis, but also increasingly by Russia and even Turkey, which has been closing its border and making arrests.The US has also increased its military participation against Islamic State, which has lost territory recently.According to one figure Karmon has seen, France has around 1,800 of its citizens fighting in the Middle East.As for the competition between Islamic State and al-Qaida, he points out that this can be seen clearly in Yemen, where al-Qaida has been cooperating with the Saudi regime, while Islamic State has been carrying out attacks on its own.Islamic State is the big winner over al-Qaida because of the Paris attack and its hold on territory, something al-Qaida never succeeded in doing.Jean-Pierre Filiu, professor of Middle East studies at Sciences Po’s Paris School of International Affairs and a long-time French diplomat who served in Arab countries, wrote in the European Politico website on Sunday: “The jihadi leadership in Raqqa is hoping to precipitate a Western ground offensive in Syria that would be as disastrous as the US-led invasion of Iraq in 2003, the very invasion that fed what would become the ‘Islamic State.’” This view jibes with a report released on Monday by Matthew Henman, head of IHS Jane’s Terrorism & Insurgency Center, and Anna Boyd, head of Middle East Analysis at IHS Country Risk.“The Islamic State aims to provoke an intensification of coalition operations against it, in support of its narrative of an apocalyptic confrontation, and to use terrorist attacks outside Syria and Iraq to compensate for the pressure of sanctions and conventional force on its ability to retain its territorial control over a quasi-state caliphate,” they wrote.However, the long-term strategy of Islamic State is bound to lead to a massive effort to destroy the group, which may not eliminate it, but will cripple its ability to function and retain command and control of its cells throughout the world.While Islamic State might believe that provoking a Western invasion could help its image and bog down the West in another Middle Eastern war, this would a losing wager for the group.