Analysis: Which Iraq will triumph in Mosul?

As the Iraqi army and Kurds fight side-by-side against ISIS in Mosul, Kurds wonder whether their unique role in fighting extremism will be remembered when the war ends. 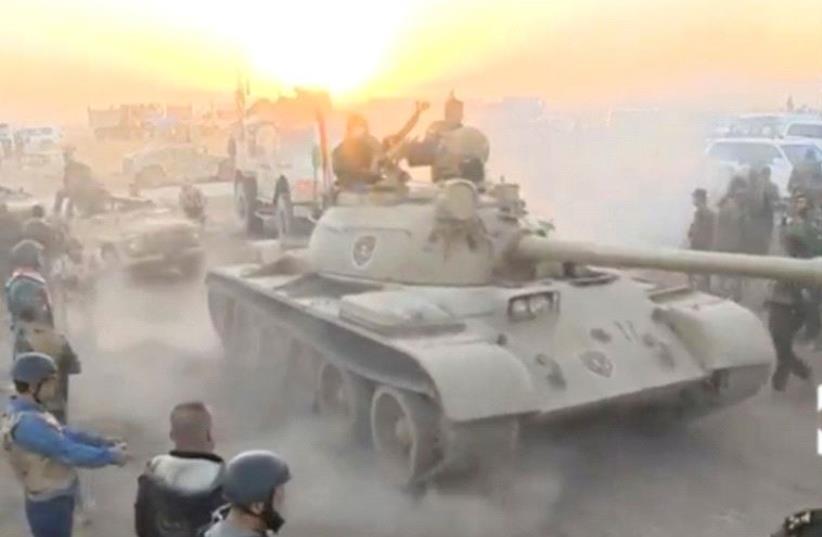 Tanks move past soldiers in military fatigues as the sun begins to set east of Mosul, where the Iraqi government launched a US-backed offensive to drive Islamic State from the northern city, in this still image taken from video released October 17, 2016
(photo credit: REUTERS)
Advertisement
On October 20 the Kurdish peshmerga launched an operation to liberate the town of Bashiqa. They sought to flank the town and surround it and some villages nearby.  But the offensive was slowed by tough ISIS resistance and what Kurds said was a lack of enough coordination and air support from the American-led coalition.  By nightfall there had been casualties and the operation paused for a day. Bulldozers went to the front and carved out new frontline positions.  Farther southeast on October 21 the Iraqi army’s elite counter-terror Golden Division was hammering ISIS in Bakhdida and Bartella, two Christian towns that are 12 kilometers from Mosul.  The Iraqi 9th armored division was also involved in trying to take Bakhdida, but the operation was moving slowly.  There is a momentary feeling of a unique alliance in Iraq as Kurdish peshmerga and Iraqi, mostly Shia, Arabs from the regular army fight side by side against ISIS.  But the alliance is complex.  Kurds were surprised to see Iraqi flags fluttering from humvees and trucks moving to the front in early October after the autonomous Kurdistan Regional Government allowed Iraqi army transit through the region to get to the front.  People wondered why Kurds have fought and died for two years for these frontlines, while the Iraqis now are being transported to them with ease. They wonder whether the American-led coalition wants to use Kurds to fight ISIS but will not stand by Kurdistan when the war is over.  There is a belief among many in the Kurdish region that Iraq is like a shackle weighing down people’s hopes and dreams.  One lawyer told me he has difficulty traveling abroad on an Iraqi passport. “It’s the worst passport except for the Somali one.” What benefits does the Kurdish region get from being part of a state that often feels like a failure. No one wants to come on tourism to “Iraq”, but they would come to “Kurdistan.”  Oil revenues and state budget have been cut to the Kurdish region by the central government and the Kurd sought to export oil on their own. Trade comes from Turkey, not via Baghdad. New malls glisten in Kurdistan and there is an open, liberal atmosphere. But in Baghdad the parliament passed a ban alcohol sales and importation, reverting to conservative ways. As the offensive to defeat ISIS creeps toward Mosul it appears essential that the cooperation taking place today between Sunni tribal leaders, Kurds and Shia can present an opportunity for a different Iraq to triumph in Mosul.  A Sunni Arab sheikh,and Iraq parliament member who lives in Erbil named Ahmed al-Jarba visited the frontline on October 22 was upbeat that this united Iraq might triumph. “There is good cooperation between Peshmerga and the Iraqi army, including the Sunni tribes that we could not predict before.  I want to assure people of Mosul that they will be liberated.”  He said that unlike in Ramadi or Fallujah where Sunni civilians suffered, the residents of Mosul will not be harmed by the offensive. Kurdish fighters on the ground said they were also hopeful. “We have good relations with the Iraqis stationed here,” a local officer said as dust from an Iraqi tank driving toward the front from Gwer blanketed them. There are many signs of cooperation.  Christian militias are fighting side by side with the Iraqi army to liberate Christian towns in Nineveh which border Mosul. Even the Shia militia Hashd al-Sha’abi has put out a video showing Christian churches reoccupied with their parishoners. Kurds have worked hard to rescue members of the Shabak minority whose inhabit more than 50 villages that are being liberated from ISIS. Yazidis have gained refuge in the Kurdish region. For a moment it seems like this grand alliance is something unique and special.  But none of these forces are united.  Christians have three different militias, one close to the Kurdish government and one closer to Baghdad, Iraqi tanks fly Shia flags, Kurds have Kurdish fags. Some Shia Shabak minorities support Baghdad, whereas Sunnis prefer Kurdish rule. Many groups want their own autonomous areas, with Assyrian Christians, Yazidis, and Sunni Arabs all talking about more rights after the threat ISIS posed.  And don’t forget the Turks whose have revived old Ottoman-era connections to Mosul and want a role protecting the Turkmen minority. Unity in separateness might be a good term for what has happened in Iraq. Unity against a common enemy. The question many are asking is whether this can be maintained after the conflict with ISIS ends. The Kurdish economy was badly affects by the war.  Tourism and development projects were put on hold. Men postponed studies to defend their land.  Security has been upped throughout the country with checkpoints on the roads and constant need to track down potential threats.  The international community has been supportive of the Kurds, with the US funding the Peshmerga directly and training and working closely with Kurdish units alongside other coalition countries. When the war is over will that aid and support dry up.  The US administration of Barack Obama has been pressing for the Mosul offensive to be finished by the time his term ends. That leaves a new US administration without the “problem” of fighting ISIS in Iraq, but if that administration is not committed to its Kurdish allies and prefers to revert to old form of only dealing with Baghdad, it will find that the same problems that existed before 2014 will return.