Didier Reynders is currently on a visit to Israel, the Palestinian Authority and Gaza. 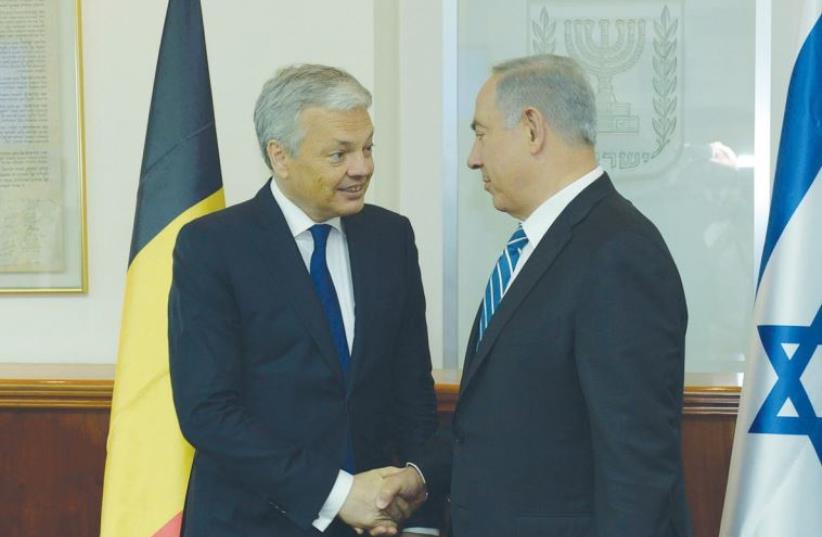 PRIME MINISTER Benjamin Netanyahu welcomes Belgian Foreign Minister Didier Reynders to his Jerusalem office
(photo credit: GPO)
Advertisement
Belgian Deputy Prime Minister and Foreign Minister Didier Reynders, who is currently on a visit to Israel, the Palestinian Authority and Gaza, is confident that in the long run that Islamic State will be defeated by a coalition of some 60-plus democratic states committed to fighting terrorism.Speaking on Monday to diplomats, heads of pro-Israel NGOs and journalists at a breakfast meeting sponsored by the Israel Council on Foreign Relations, Reynders spoke of efforts and strategies both implemented and required to weaken the power and influence of IS and said that to some extent these measures had already proved to be effective.Relating to the anti-terrorist coalition, Reynders said that two years ago, representatives of these countries had come together to decide on common action and shared responsibilities in addition to anything that each individual country is doing. While non-belligerent political action is preferred, this includes military action if necessary in the fight against virulent attacks against the innocent, working toward halting the financing of terrorism, curbing migration from the Middle East to Europe, integrating the migrants who are already in Europe and attempting to stabilize those places in the Middle East that have already been liberated, so that citizens who want to do so, can return home.The terrorist attacks in Brussels on March 22 were not just attacks against Belgium, but against the international community, said Reynders, who pointed out that there were many people from abroad at the airport and in the Metro which were the targets of the attack.It is important to understand “why our young people are going to Syria to fight with IS against our values,” he said.As far as Belgium is concerned, the capacity of IS has been reduced as evidenced by the fact that there are fewer Belgians leaving for Syria than there were some months ago.The anti-terrorist coalition has tried to organize a transition within the Syrian administration, but it has been difficult to persuade the Syrian authorities to come to the table, said Reynders. A similar problem exists in Iraq, he added.Though convinced that “we will win this war, even if it takes a long time, “ Reynders emphasized that “we also have to win peace,” and leaders of countries in the region will have to find ways to stabilize their countries in a sustainable way on the basis of citizenship and not on ethnic or religious considerations.Reynders repeatedly stressed the urgency of an exchange of knowledge between the intelligence services of all countries engaged in fighting terrorism, explaining that there are more than 30,000 foreign fighters from more than one hundred countries creating havoc around the globe. Their penetration can be stopped only through an exchange of information.Some countries deny that the phenomenon of foreign terrorists on their soil exists, Reynders conceded, but it can only be conquered he continued through discussion and a candid exchange of information.Belgium has succeeded in dismantling some terrorist networks he said, and has prosecuted terrorists in court. “We need to stick to our values in the fight against terrorism and not adopt their methods,” he insisted.The tradition of intelligence services is to collect information, not to share it Reynders acknowledged, “but in the fight against terrorism it is possible to share more and more information.”The most important factor in fighting terrorism is the work of the intelligence services, Reynders insisted.Turkey has an important role in this respect, he said, because so many foreign fighters cross through Turkey to Europe.Reynders also stressed the importance of education, saying that young people need to be given all the tools to assume their role in society and to prevent violent extremism.Europe and the Middle East must join forces to counter terrorism, said Reynders The EU is playing an important role toward bringing peace to the region, he said, clarifying that the EU’s peace making efforts are directed not only towards Syria, Iraq, Lebanon and Yemen, but also encompass the Israeli-Palestinian conflict.The EU is still in favor of a two-state solution, and good collaboration between the two states, he said, and quoting Israeli policy, declared that the only way to achieve this is through direct dialogue.