'Washington Post': Campaign is an independently run initiative that is separate from the overall military effort being waged against the extremist movement. 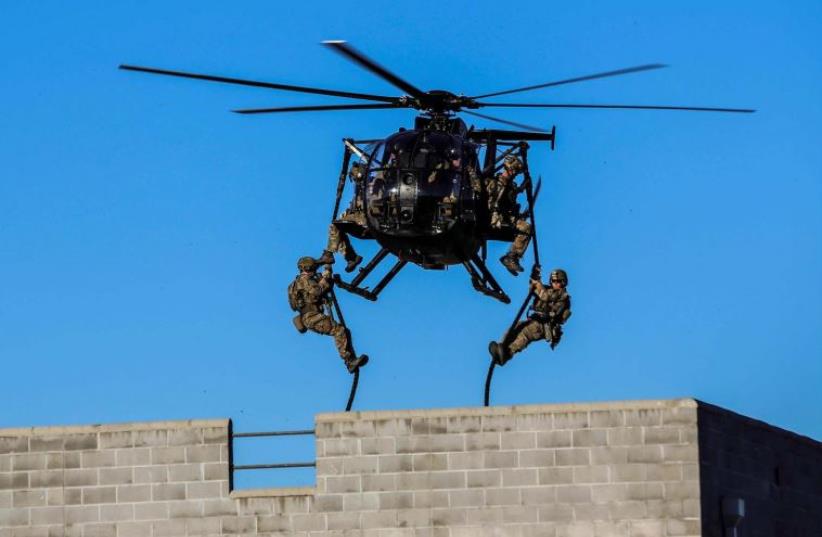 US special forces in action
(photo credit: COURTESY USASOC)
Advertisement
American commandos and the CIA have jointly launched a secret drone operation to track down and kill senior Islamic State (ISIS) terrorists in Syria, The Washington Post is reporting in Wednesday editions.According to the Post, the campaign is an independently run initiative that is separate from the overall military effort being waged against the extremist movement by the US and other regional allies.The new campaign is considered to be an escalation of the CIA's involvement in the war against ISIS. Thus far it has yielded results, including the recent killing of a British national thought to be behind ISIS' social media efforts.According to the Post, American counter-terrorism officials say that the secret plan is the latest indication that decision-makers in Washington now view ISIS as a more menacing threat than al-Qaida.US officials told the Post that while the CIA has taken a more active role in identifying and locating so-called "high-value targets," the actual targeted killings of these individuals is being carried out by special forces - also known as Joint Special Operations Command (JSOC).The US military confirmed on Friday that a British hacker who was one of ISIS's top computer experts and active in encouraging people abroad to carry out "lone wolf" attacks was killed in Syria by a US air strike.Junaid Hussain of Birmingham, England, was killed on Aug. 24 by a US military air strike on the Islamic State stronghold of Raqqah, said Air Force Colonel Pat Ryder, a spokesman for US Central Command.Hussain had been involved in "actively recruiting ISIL sympathizers in the west to carry out 'lone wolf' style attacks," Ryder said, using an acronym for the militant group that has seized large parts of Syria and Iraq.The CIA has pioneered the use of drones to intercept senior terror suspects. Its growing involvement in the war against ISIS is a reflection of the Obama administration's frustration over the failure to curb ISIS' expansion through the use of conventional military means, The Washington Post reported.The JSOC also has an extensive track record in eliminating top terrorist suspects, including al-Qaida leader Osama bin Laden.