Authorities had taken seriously indications of a planned attack with explosives. 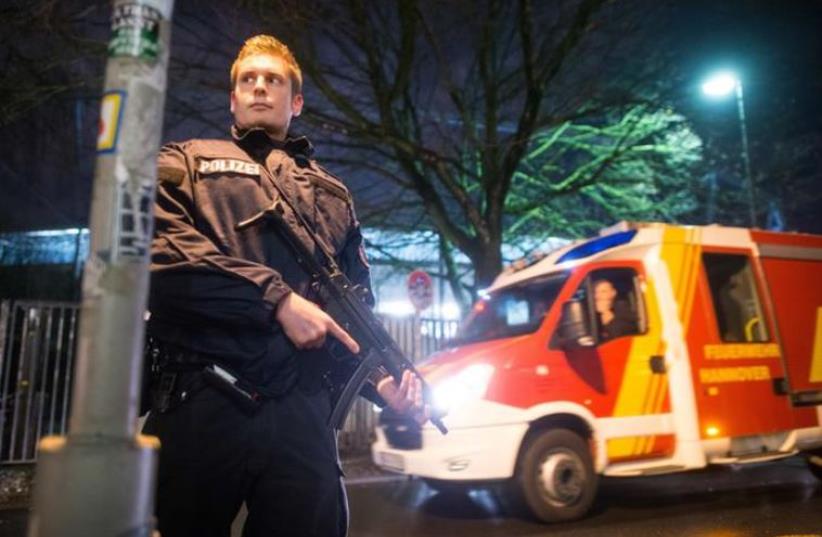 Heavy armed Police stand outside the stadium after the match was called off by police due to a security threat, November 17, 2015.
(photo credit: REUTERS)
Advertisement
HANOVER, Germany - A friendly soccer game between hosts Germany and Netherlands in Hanover was called off less than two hours before its start on Tuesday for fear of a bomb attack. Other locations across the city were also evacuated, but a German official later confirmed that no explosives were found and no arrests were made.Earlier in the evening, Hanover Police President Volker Kluwe said there were "specific indications" of a planned attack with explosives at the game."We had received specific indications that an attack with explosives was planned," Kluwe told NDR state broadcaster. "We took them seriously and that is why we took the measures,"Regarding the soccer stadium, police said that "the visitors, who were already in the stadium at that time, were asked to leave the stadium without panicking." Apart from stadium, police also evacuated Hanover's TUI multi-purpose arena where a concert was about to start, and what seemed to be a suspicious object was found at a local train station. After Friday's attacks in Paris, security measures in Hanover had been tight. German Chancellor Angela Merkel was set to attend with Vice Chancellor Sigmar Gabriel and government ministers, in a show of solidarity with France.Two Dutch government ministers attending the match - Defense Minister Jeanine Hennes and Health and Sport Minister Edith Schippers - were returning home.The world champions had not initially wanted the game to go ahead after having played against France in Paris on Friday as a wave of attacks hit the city, killing 129 people.The contingent of 80 Germans, including players, coaches and staff, then spent the night holed up in the changing rooms of the Stade de France stadium as the attacks took place across the capital, before heading for the airport on Saturday morning.But the players, coaches as well as the national football association then decided to go ahead with the game to show unity.