Syria's army declared victory over Islamic State on Thursday, saying its capture of the jihadists' last town in the country marked the collapse of their three-year, hard-line reign in the region. 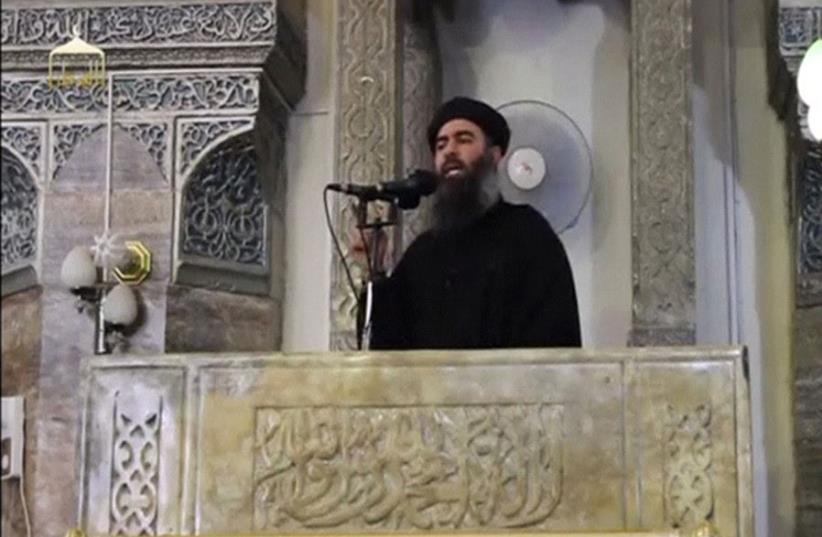 Al-Baghdadi proclaimed himself 'caliph,' or ruler of all Muslims, from the pulpit of the al-Nuri Mosque on July 4, 2014
(photo credit: REUTERS/SOCIAL MEDIA WEBSITE VIA REUTERS TV)
Advertisement
A Hezbollah-run media unit said on Friday Islamic State leader Abu Bakr al-Baghdadi was reported to have been in the Syrian town of Albu Kamal during the Syrian army and its allies' operation to clear it.The military unit did not say what had happened to Baghdadi, give further details or identify its sources.The US-led coalition against Islamic State said on Friday it had no "releasable information" on Baghdadi's whereabouts.
ISIS leader Baghdadi to Jews: Palestine will be your graveyard
Syria's army declared victory over Islamic State on Thursday, saying its capture of the jihadists' last town in the country marked the collapse of their three-year rule in the region.But the army and its allies are still fighting Islamic State in desert areas close to Albu Kamal near the border with Iraq, the Syrian army said on Thursday.On Friday, the Syrian Observatory for Human Rights said Islamic State has taken back control of half of Albu Kamal.The capture of the border town had sealed "the fall of the terrorist Daesh organization's project in the region," an army statement said on Thursday, using the Arabic acronym for Islamic State.An audio message purported to be from Baghdadi was released in September. Baghdadi declared himself caliph and heir to Islam's historic leaders from the great medieval mosque in Iraq's Mosul in 2014.