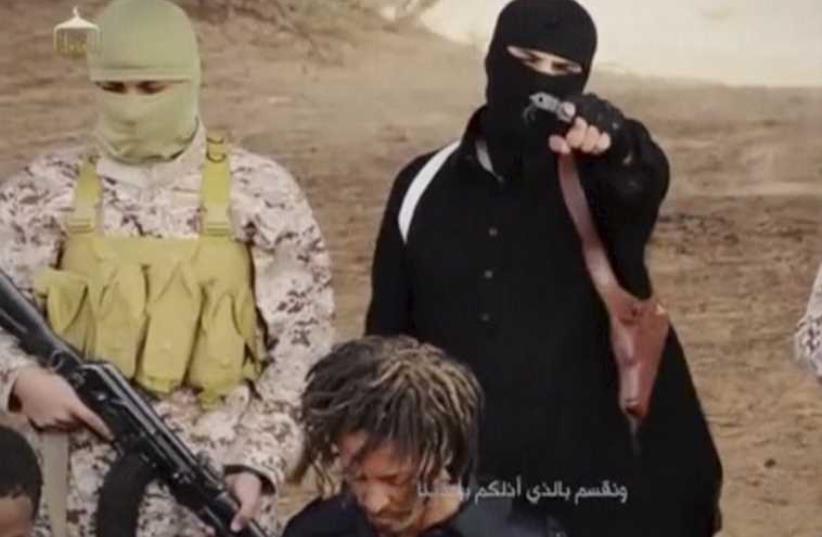 An Islamic State militant holds a gun while standing behind what are said to be Ethiopian Christians in Wilayat Fazzan
(photo credit: REUTERS)
Advertisement
A Syrian journalist who was shot by ISIS gunmen in the Turkish city of Gaziantep on Sunday is now in critical condition, fighting for his life, after being severely injured. The ISIS-affiliated news agency, Amaq, reported Monday that "a security detachment that belongs to ISIS shot yesterday the journalist Zaher al-Shurqat, who anchors anti-ISIS TV programs."According to the report, ISIS gunmen shot Shurqat in his head with a silenced pistol in front of his workplace in Gaziantep."Aleppo Today," the TV channel where Shurqat works, denied reports about the Syrian journalist's death, emphasizing that he is still alive, hospitalized in a medical center in Gaziantep.Shurqat was among the first Syrians to join the fight against ISIS in the Syrian border town of al-Bab. He was a commander of Abu Bakr al-Siddiq Brigade, a Syrian opposition faction that later merged with the biggest rebel group in Syria, Ahrar al-Sham.After ISIS seized the town of al-Bab in March 2014, Shurqat headed to Turkey, where he anchored a TV program that documented daily life in Aleppo under ISIS control. He also anchored a program titled "ISIS as reflected by commanders," which covered the opinions of commanders in the Free Syrian Army about ISIS.The Turkish city of Gaziantep, inhabited by many Syrian activists opposing ISIS, has recently witnessed several assassination attempts committed by ISIS gunmen. ISIS' recent victim in the city was the Syrian journalist, Naji Jerf, who was assassinated in December 2015. Jerf turned into an ISIS target after he started working in Raqqa Slaughtered Silently, a group of Syrian journalists that document the systematic violations of human rights committed by the terror organization in Raqqa.