Today’s Mosul and the areas around it were the site of many of the worst crimes of ISIS against cultural heritage. 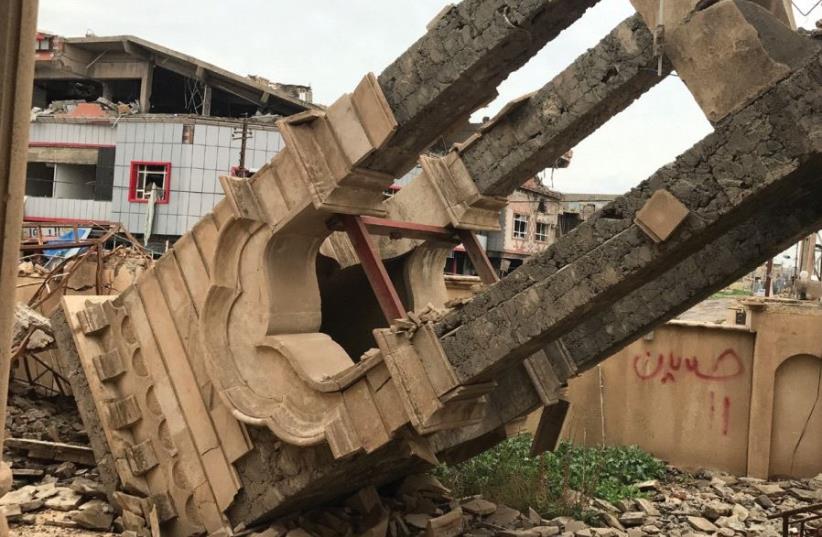 ONE OF MANY churches destroyed by ISIS in the Christian town of Qaraqosh, Iraq.
(photo credit: SETH J. FRANTZMAN)
Advertisement
QARAQOSH, Iraq – “The Jews came to Iraq as prisoners for 70 years,” an old Assyrian man said as we drove back to Qaraqosh from Mosul in early April.He spoke of the diverse history of the Nineveh plains, the flatlands around Mosul that were once populated by large numbers of Christians, Yazidis and other minority groups.The 70 years of captivity, which took place in the seventh century BCE, form the basis for the Psalm, “By the rivers of Babylon, we sat and wept when we remembered Zion.”Today’s Mosul and the areas around it were the site of many of the worst crimes of ISIS against cultural heritage.A submission to the UN Special Rapporteur in the field of cultural rights by the Research Assessment and Safeguarding of the Heritage of Iraq in Danger in September 2016, concluded that ISIS carried out “planned and systematic” destruction.In Mosul and Nineveh, the report identifies 155 religious sites destroyed by the extremists, including 74 Shia religious sites, 26 Yazidi and nine Christian sites.
Destruction in Mosul , Iraq amid the fight against ISIS in April 2017 (SETH J. FRANTZMAN)
“Nearly all the architectural landmarks that formed a unique panorama of the city have been removed,” the report said. This includes the mosque of the prophet Yunus and the mosque of the prophet Seth, as well as a tomb associated with Nabi Daniyal.The names Yunus and Daniyal also refer to figures from Jewish history, Jonah and Daniel.Jonah prophesied the destruction of the Assyrian city of Nineveh, whose ruins are near modern-day Mosul; Daniel was one of the Jews carried off to Babylon.ISIS sought to erase the history of everything that had come before its zealous Islamist extremism. Some of this had unintended consequences.When the extremists blew up the mosque built at the tomb of Jonah, they uncovered older ruins that are thought to date back 2,000 years. Photos of these new discoveries were revealed in March of this year after eastern Mosul was liberated by the Iraqi Security Forces.However, overall the result of ISIS rule has been to leave a swath of destruction across northern Iraq, as if a giant claw scratched the landscape. Christian towns such as Qaraqosh and Bartella were badly damaged, thousands of houses burned and churches systematically looted, their crosses blown off walls and their bell towers demolished. Yazidi shrines as well as the shrines of Kakei, an indigenous religious minority in northern Iraq, were also destroyed by ISIS.The only well-known surviving Jewish site in the region, the tomb of the prophet Nahum, was saved from destruction by the stout defense of the Kurdish Peshmerga, who checked ISIS advance in 2014 outside the town of al-Qosh, where it is located.Locals in the region have a long memory. The old Assyrian Christian who agreed to guide me around Qaraqosh, once home to 60,000 Christians, says the destruction today was the worst since the Persian invasion of 1743. This speaks to the history of persecutions and destruction Nineveh has seen.In the study “The Christians under Turkish Rule,” Dr. Matti Moosa writes about ISIS-like destruction in the 13th century.In one passage, he writes that, “The natives of Nineveh took refuge in the monastery of Mar Daniyal near the village of Bartulli (Bartella). But when they left it and crossed the river Zab to go to Arbil (Erbil), the amir [ruler] Kutulbeg accused them of coming from the side of the enemy and killed them all.” The monastery still exists today, as does the village of Bartella and the city of Erbil.Many of the sites that ISIS destroyed have not been fully surveyed to determine what remains and what is forever lost.This is partly due to the priority of the war effort. At Nimrud, more than 70 percent of the 13th-century BCE city was destroyed, according to Iraq’s Deputy Minister of Culture, Tourism and Antiquities Qais Rasheed.Ancient fourth-century monasteries, such as Mar Benham southeast of Mosul, which were desecrated by ISIS, are not even safe to visit because of ISIS practice of laying IEDs around mass graves and other sites.The lack of security in the area around Mosul will likely mean that many sites, of which there are more than 1,000 of archeological value, may remain abandoned and unstudied for years.Apart from a few posters of Jesus that Assyrian Christians sufficed to put up in the ruined churches, significant evidence of the destruction remains six months after liberation.During my visit to the area, I did not come across any evidence that international NGOs, scholars or government officials were doing anything to catalogue, renovate or preserve the areas of Nineveh and Mosul targeted by ISIS.The extremist rule from 2014- 2016 may have put the last nail in the coffin of this rich cultural area, cleansing and persecuting minorities and destroying their heritage. Many local Christians with whom I spoke estimated that only 20 percent of the inhabitants who lived in the area before 2014 would return.