Around half of the income comes from taxation and confiscation from businesses within its territory and 43% from oil, according to a study released Monday. 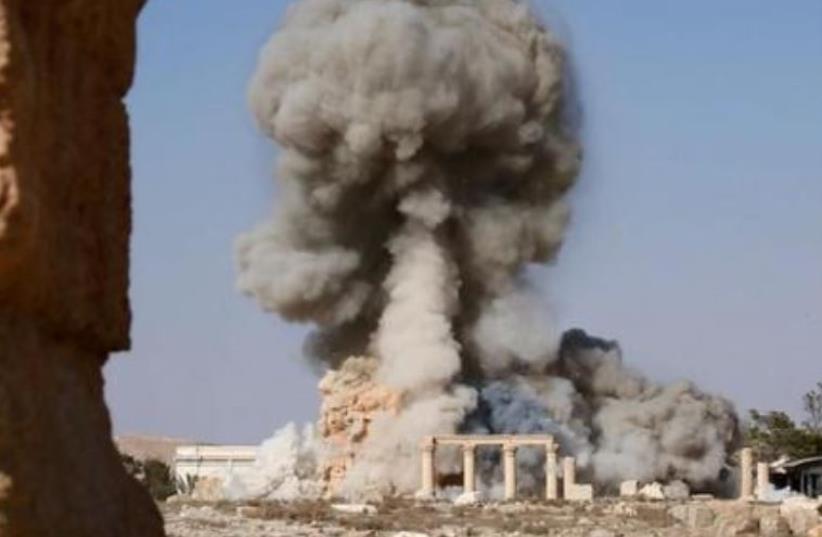 ISIS militants blow up Roman-era temple of Baal Shamin in ancient city of Palmyra
(photo credit: ISLAMIC SOCIAL MEDIA)
Advertisement
Islamic State’s 2015 monthly income totals some $80 million, with around half coming from taxation and confiscation from businesses within its territory and 43% from oil, according to a study released Monday.“Unlike al-Qaida, Islamic State has not been dependent on money from foreign donors, to avoid leaving it vulnerable to their influence,” said Columb Strack, senior analyst at IHS (Information Handling Services, an information and analysis leader), and lead analyst for IHS Conflict Monitor.“Our analysis indicates that the value of external donations to Islamic State is minimal, compared with other revenue sources.”The study of open source intelligence, including social media, was conducted by the team responsible for the monthly Conflict Monitor at IHS Aerospace, Defense and Security.“According to information gathered from Arabic-language social media, and our in country source network, efforts to target Islamic State’s sources of revenue are paying off,” Strack said.Islamic State has at least six main sources of revenue: production and smuggling of oil and gas; taxation on the profits of all the commercial activities held in areas under its control; confiscation of land and properties; trafficking of drugs and antiquities; criminal activities such as bank robbery and kidnapping for ransom; and staterun businesses, such as running small enterprises, including transport companies or real estate agencies.“One of Islamic State’s main sources of income comes from taxation on economic activity and basic services, including electricity, mobile phone networks, Internet access, retail, industry and agriculture, within territory it controls,” said Ludovico Carlino, senior analyst at IHS and also on the IHS Conflict Monitor team.“They charge a 20% tax on all services. Its business model, which is heavily focused on intermediaries and taking percentage cuts, also means that the Islamic State is able to make profits from areas and sectors where it is not directly involved,” Carlino added.The US has focused mostly on cutting off the group’s oil income and there is some evidence it is struggling to balance its budget, with reports of cuts to fighters’ salaries, price hikes on electricity and other basic services, and the introduction of new taxes, according to IHS Conflict Monitor.“Tax revenues are much harder for the US-led coalition to target without having a substantial negative impact on the civilian population, and would most likely be counterproductive,” continued Carlino.Meanwhile, a leaked internal Islamic State document shows it has a detailed plan on how to build and operate its state, The Guardian reported on Monday.The 24-page document, written last year, contains plans for how to conduct foreign relations, propaganda, and operations of the oil sector.The pages also reveal the terrorist group’s plans for training fighters, including children, and a “detailed commentary on the technologies” of the enemy and “how the soldiers of the state can take advantage of them,” according to the report.