Terrorist threatens leader along with entire Russian population: "You will not find peace in your homes." 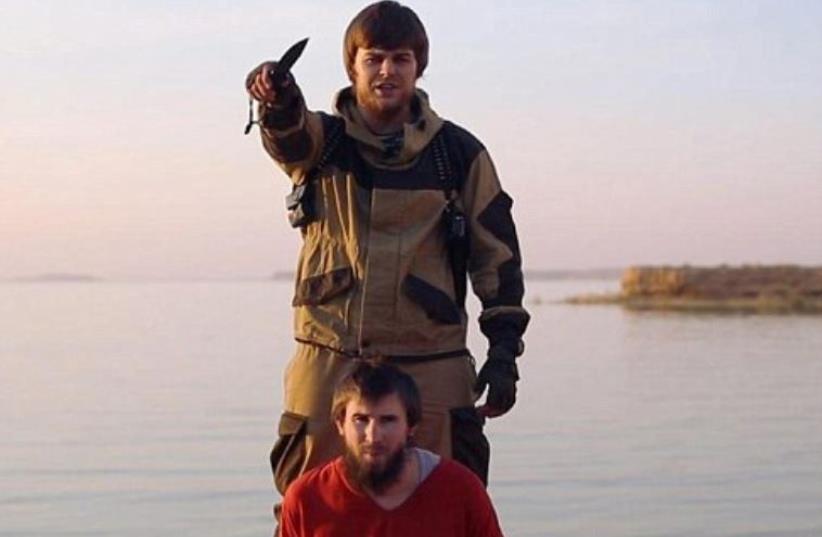 A new ISIS video shows a Russian-speaking terrorist murdering a man he accused of being a Moscow spy
(photo credit: screenshot)
Advertisement
ISIS released new video footage on Wednesday of the beheading of an alleged Russian spy. The video included a direct message for Russian President Vladimir Putin, threatening every Russian citizen, according to a report by Fox News.In the video, the alleged Russian spy confessed to his crimes in a darkened room, claiming to be working on behalf of Russian intelligence to gather information on the Islamic State militants, specifically those of Russian origin, and jihadis in the area. The video then moved on to the scene of the murder which took place outside near a body of water. The video showed the Russian prisoner in a bright orange jumpsuit with a knife wielding ISIS militant standing behind him. "Here today, on this blessed land, the battle [against Russia] begins," the militant says in Russian.The terrorist explained in the short video that the airstrikes ordered by Putin against ISIS only made the terrorist group realize that "we are doing the right thing," and will continue in their fight. The ISIS terrorist continued on to threatened the entire Russian population. "You will not find peace in your homes. We shall kill your children for every child you've killed here," he said. "And we will destroy your homes for each home you destroyed here," he continued, brandishing his knife.The president of Russia's Chechnya region, Ramzan Kadyrov, said on Thursday that whoever was responsible for the beheading of a Russian man from Chechnya, purportedly shown on an Islamic State video, will be killed."Yes, he was Russian-Chechen, he was beheaded .. there are proven facts," Kadyrov told journalists. "Whoever killed that man ... won't live for long." The video came in response to President Vladimir Putin's decision to  intensify Russia's air strikes on Islamist militants in Syria following the October attack on a Russian passenger jet over Egypt that left 224 passengers and crew members dead. The attack was claimed by an ISIS affiliate group operating in the Sinai. Ordering the country's secret service to hunt down those responsible for blowing up the plane, Putin said at the time that the effort to bring them to justice should be exhaustive."We will search for them everywhere, wherever they are hiding. We will find them anywhere on the planet and punish them," Putin said.Reuters contributed to this report.