The attack targeted an outpost manned by the Jaish al-Ashair rebel group at the Rakban refugee camp. 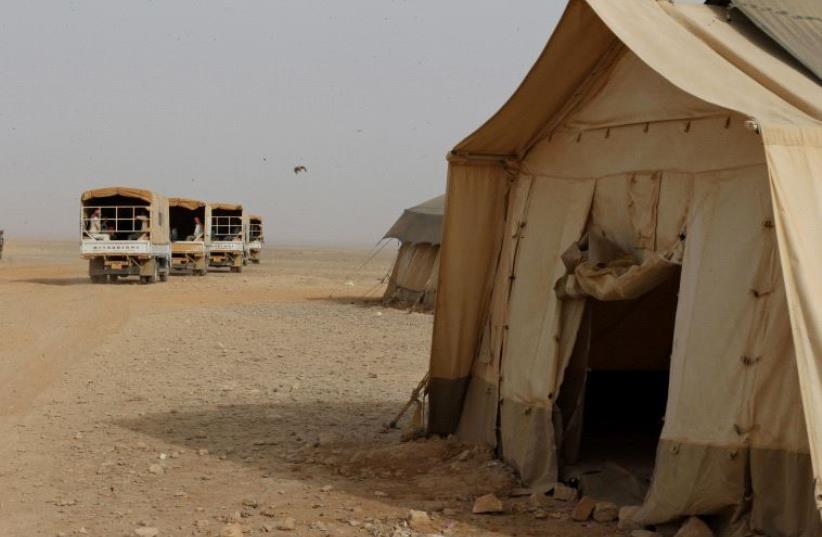 Rakban refugee camp [file]
(photo credit: REUTERS)
Advertisement
AMMAN - A suicide bomber believed to be from the Islamic State militant group killed three people and injured at least 20 others in an attack on Sunday at a refugee camp in Syria near the border with Jordan, a rebel official said.The attack targeted an outpost manned by the Jaish al-Ashair rebel group at the Rakban refugee camp, said Said Saif, spokesman for the Forces of Martyrs Ahmed al-Abdo Brigades, a Free Syrian Army (FSA) rebel faction fighting against Islamic State.Rakban is home to more than 75,000 people, among the millions of Syrians who have fled their homes during the country's five-year civil war that has killed hundreds of thousands of others.Jaish al-Ashair is one of the groups that polices the camp. The blast, triggered when a bomber rammed an explosive-laden truck into the post, targeted one of its positions about 400 metres (yards) from a medical station, Saif said.During a similar attack in July, six Jordanian border guards were killed by a suicide bomber who drove his car at speed across the border and into a military post near Rakban, which is located in a desert area near where Islamic State is present.