"Its broadcasts and will have a negative impact on our youths, elders and community," says local. 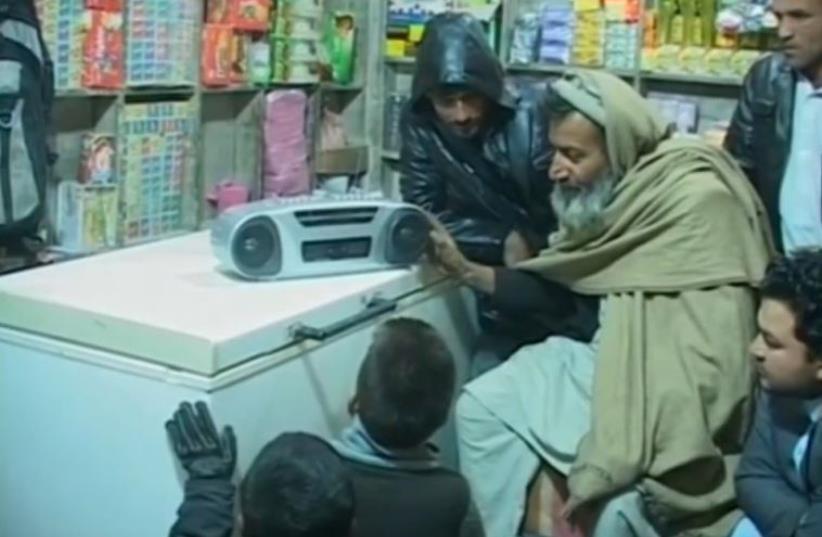 Afghani residents tuning in to ISIS broadcast on radio.
(photo credit: REUTERS)
Advertisement
Islamic State militants in eastern Afghanistan have taken to radio airwaves to win recruits as they try to build strength and replace the Taliban as the leading force in the Islamist insurgency.Officials have been increasingly concerned by the broadcasts, which encourage young people to find a sense of direction in the radical movement.If the broadcasts take hold, officials fear they will feed off a growing sense of hopelessness among many inured to war and struggling to get by in an increasingly tough economic climate.In a shop in Jalalabad, a city within the radio broadcasts' sphere, residents could be seen huddled around a radio."Its broadcasts and will have a negative impact on our youths, elders and community," said Layq Gham Sharik.Another resident, Ayatullah Niazai, said he wanted the national government to end the broadcasts "as soon as possible."The 90-minute daily Pashto language broadcast, called "Voice of the Caliphate", consists mainly of interviews, messages and songs about Islamic State.It can be heard in Nangarhar, the eastern province where Islamic State has established its stronghold.It controls several districts wrested from the Taliban, who are seeking to re-establish their hard-line Islamist regime after being toppled by US-led military intervention in 2001.Officials in Nangarhar say they had so far been unable to block the broadcasts, which appear to shift location regularly."The radio (Islamic State radio) operates from border areas in Nangarhar," a spokesman for its governor's office, Attaullah Khogyani, told Reuters. "Afghan security and detective forces are jointly working to find it. We have some progress and soon this radio will be disabled and its workers will be arrested."Islamic State is a relatively new force in Afghanistan and there is some dispute about how strong it is, how many members it commands and how closely it is linked operationally to the movement's main arm in Iraq and Syria.Security officials say many members are former Taliban fighters who have fallen out with the current leadership or who are seeking a more extreme form of militant activity.Last week, the commander of international forces in Afghanistan, US General John Campbell, said there were between 1,000 and 3,000 members of the movement in Afghanistan and he said its influence would spread if left unchecked.