London metro stabber 'had ISIS images on his phone'

A 56-year-old unnamed man suffered serious but not life-threatening injuries in the attack at Leytonstone underground station, about six miles east of central London. 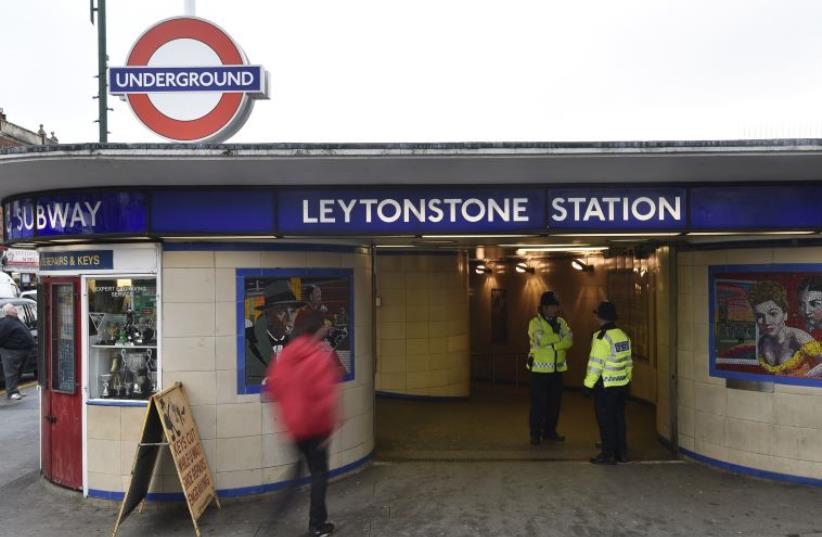 Police officers stand on duty outside Leytonstone Underground station in east London, December 7, 2015.
(photo credit: REUTERS)
Advertisement
A 29-year-old man appeared in court on Monday after being charged by counter-terrorism officers with attempted murder in a weekend knife attack at an underground station in east London.Wearing a grey t-shirt and grey track suit bottoms, Muhaydin Mire of east London spoke only to confirm his name, age and address at Westminster Magistrates' Court.A 56-year-old unnamed man suffered serious but not life-threatening injuries in the attack at Leytonstone underground station, about six miles (10 km) east of central London, while a second person suffered minor injuries.Prosecutor David Cawthorne said the attack occurred at 1900 GMT on Saturday as the victim walked through the station."It was a violent, sustained and unprovoked attack during which the victim was punched, knocked to the ground and repeatedly kicked on the ground," he said.The victim suffered a 12-cm (5-inch) wound to his neck and was in surgery for five hours, he said.Mire was remanded in custody to appear at London's central criminal court, the Old Bailey, on Friday. According to AFP, prosecutors claimed at court on Monday that the attack was an act of terrorism and images and flags associated with Islamic State were found on Mire's phone. Britain is on its second-highest security alert level of "severe," meaning a militant attack is considered highly likely, though not imminent, mainly because of the threat posed by Islamic State militants in Syria and Iraq.The authorities say British security forces have thwarted seven terrorism plots in the past year.Last week, British war planes joined air strikes for the first time against Islamic State fighters in Syria.After the attacks claimed by Islamic State militants in Paris on Nov. 13 which killed 130 people, police in London said they had boosted the number of armed officers able to respond to any incidents.Deputy Chief Constable Adrian Hanstock from the British Transport Police said the number of firearms teams had doubled in the last year and they had boosted the number of officers and patrols across the London underground network in response to Saturday's stabbing."We work very closely with all our intelligence partners and if we do have any indication there is likely to be something significant we intervene," he told BBC radio.