The recapture of Ramadi deprives Islamic State militants of their biggest prize of 2015.

Iraqi forces advance in fight with Islamic State in Ramadi
Advertisement
Iraq's military flew the Iraqi flag above the central government complex in city of Ramadi, a military spokesman said on Monday, the morning after the army declared the city captured in its first major victory over Islamic State fighters."Yes, the city of Ramadi has been liberated. The Iraqi counter terrorism forces have raised the Iraqi flag over the government complex in Anbar," joint operations spokesman Brigadier General Yahya Rasool said in a statement broadcast on state television.The capture of Ramadi, capital of mainly Sunni-Muslim Anbar province in the Euphrates River valley west of the capital, deprives Islamic State militants of their biggest prize of 2015. The fighters seized it in May after government troops fled in a defeat which prompted Washington to take a hard look at strategy in its ongoing air war against the militants."The area of al-Hos which is near to the governmental buildings has been liberated from ISIS. Our forces are now 200 meters away from the governmental complex," said Major Marwan Yasan, Commander of the Defense and Duties regimentAfter encircling the city for weeks, the Iraqi military launched a campaign to retake it last week, and made a final push to seize the central administration complex on Sunday. 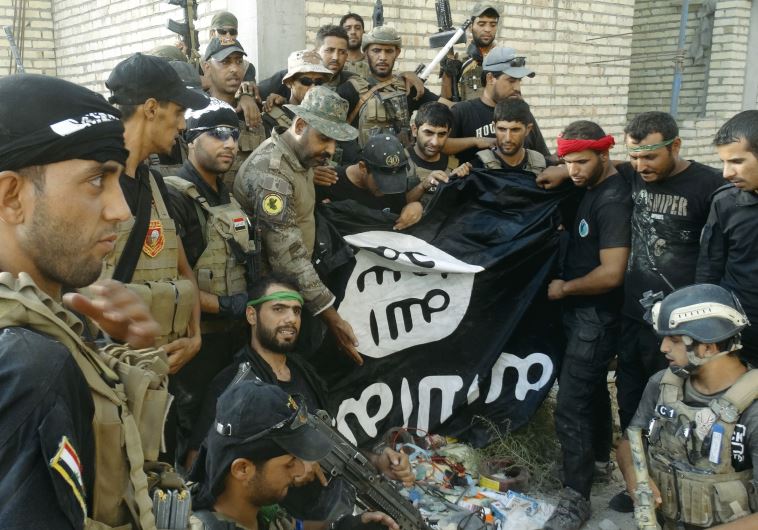 Iraqi security forces hold an Islamist State flag which they pulled down at the University of Anbar in Ramadi (photo credit: REUTERS).
State television broadcast footage of troops, Humvee vehicles and tanks advancing through Ramadi streets amid piles of rubble and collapsed houses. Some districts appeared to have been completely destroyed by the advance.Officials did not give any immediate death tolls for the battle. The government says most civilians were able to evacuate before it launched its assault.The government said the next target after Ramadi will be the northern city of Mosul, by far the largest population center controlled by Islamic State in either Iraq or Syria.Dislodging the militants from Mosul, which had a pre-war population close to 2 million, would effectively abolish their state structure in Iraq and deprive them of a major source of funding, which comes partly from oil and partly from fees and taxes on residents.