'My son was obsessed with Israel,' says father of San Bernardino shooter

The killer's father Sayed Farook says he tried to calm down his son by saying "In two years, Israel will be gone...Nobody wants the Jews." 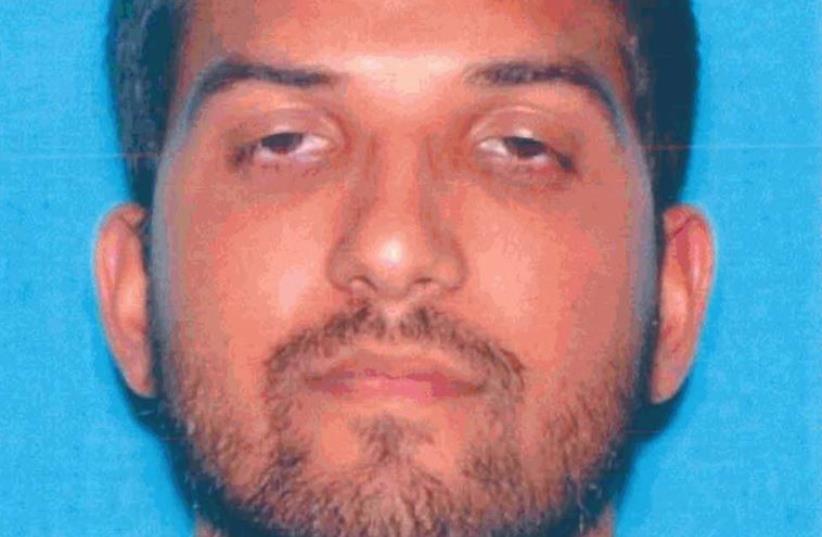 Syed Rizwan Farook is pictured in his California driver's license, in this undated handout provided by the California Department of Motor Vehicles
(photo credit: REUTERS)
Advertisement
The father of one of the San Bernardino killers told an Italian newspaper on Sunday that his son, Sayed Rizan Farook, had an obsessive hatred of Israel that underscored his Islamic radicalism and allegiance to the ideals of Islamic State. An anti-Semitic streak was also discovered within the family as the father, Sayed Farook said he tried to dissuade his son from violence by telling him that "Nobody wants the Jews...In two years. Israel will no longer exist."
Landlord says Farook a "normal" person, as media swarm apartment
The senior Farook, in an interview with Italian newspaper La Stampa, described his son as "an angel. Good, obedient studious. Maybe a little too shy, conservative and firmly against Israel." He said that although the family, originally from Pakistan but living in the US since 1973, were liberal city dwellers, his son became obsessed with Islam as a teenager, even refusing to go to parties because "a good Muslim can only see his wife dance."The younger Farook's extremist tendencies only seemed to grow with time. The father told of his shock when he discovered that his son was in possession of a firearm.
Scene of California massacre
"In my 45 years in the United States, I shouted to him, I never had a weapon," Farook said he told his son. "He shrugged and told me 'All the worse for you.'"Farook confirmed that his son spoke of Islamic State (noting, "Who doesn't these days?") and "prescribed to the ideals outlined by IS leader Abu Bakr al-Baghdadi," which included hating Israel. "'Be patient,'" he tried to tell his son. "In two years, Israel won't exist anymore. Geopolitics is changing in Russia, China and America too.""Nobody wants the Jews. What use is it to fight? We have tried it and we lost. Israel does not fight with weapons, but rather with politics.'"This was apparently still not enough to dissuade his son from violence.Farook said he will not be able to find peace again after losing his son. "You break your back to raise a child and lose him like this? How can you recover from such a tragedy. I'm 67 years old and my life here is finished."