According to 'Daily Star,' ISIS has also been forced to resort to tactics such as rigging machine guns to supermarket carts as its resources dwindle. 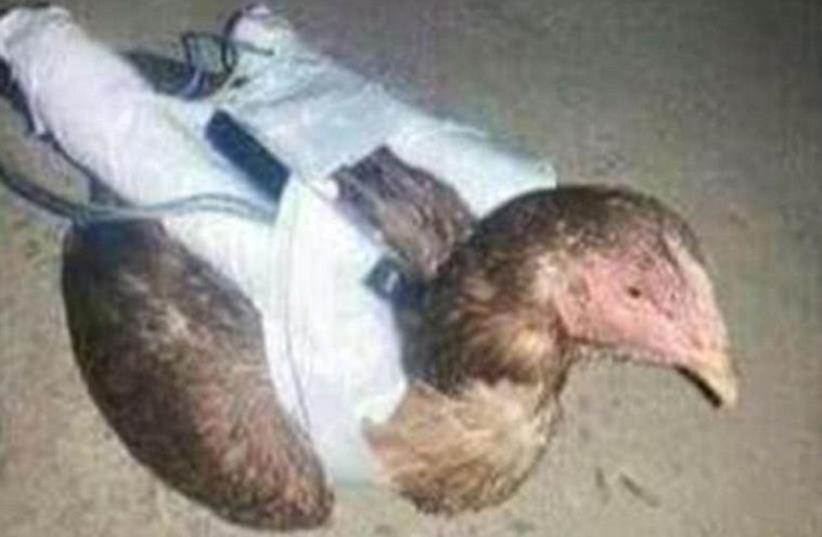 'Suicide chickens' reportedly being used by ISIS in fight against its enemies‏
(photo credit: Courtesy)
Advertisement
The brutal terrorist group Islamic State (ISIS) has now taken to strapping explosive devices to chickens in its latest effort to target its enemies, Britain's Daily Star reported on Monday.The Star published photographs of the suicide-vest wearing birds and reported that the explosive devices can be remotely detonated by ISIS commanders.According to the paper, ISIS has resorted to using the chicken bombs due to a shortage of ammunition and the need for a creative method of targeting their enemies in Syria and Iraq."The regime has countless small arms like semi-automatic weapons and pistols and lots of field weapons like mortars but the ammunition is running low and cannot easily be replaced," the Star quoted terror expert Nasser Kataw as saying.“The regime is now desperately trying to fashion its own weapons but lacks the machine shops to make such precision items,” he added.According to the report, ISIS has also been forced to resort to tactics such as rigging machine guns to supermarket carts because they lack the trucks that would normally be used to mount such weaponry.