The 18 year old is suspected of being an Islamic State recruiter who was preparing to join the terror group in Syria. 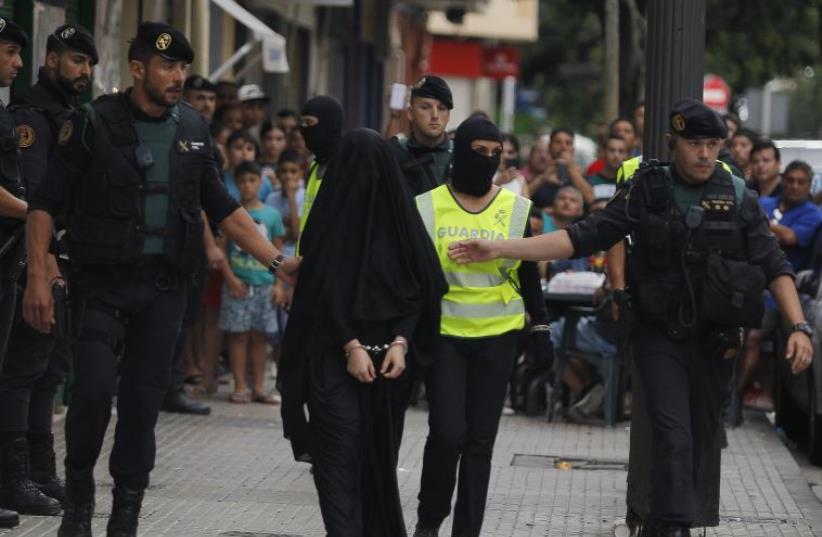 An 18-year-old Moroccan woman in Spain arrested under suspicions of being part of Islamic State.
(photo credit: JOSE JORDAN / AFP)
Advertisement
An 18-year-old woman from Morocco was arrested in Spain on Saturday for allegedly being an Islamic State recruiter. Police in Gandia, a city near Valencia, arrested the woman as she was preparing to fly to Syria in order to join the extreme Islamic terror group, according to the report by AFP. Police said in a statement that the woman, "was making the last preparations for her journey" at the time of her arrest. So far in Spain, more than 100 people have been suspected of joining Islamic State.On Thursday, Germany handed over to Spain a Moroccan man accused of being an Islamic State contact in Europe and of planning attacks in Spain, the Spanish government said on Thursday.Ayoub Moutchou, 21, was arrested by German investigators in Stuttgart on August 4 and handed over to Spanish police on the basis of a European Arrest Warrant issued by a Spanish court, an Interior Ministry statement said."Moutchou had begun the necessary contacts, in the name of Islamic State, to carry out attacks in Spain in reprisal for the recent arrests of Jihadis," it said after Spanish police brought him back from Germany. On August 22, Spain and Morocco arrested 14 people suspected of recruiting fighters to join Islamic State in Syria and Iraq, Spain's Interior Ministry said.Suspects were detained in the outskirts of Madrid and in other cities and towns in Morocco, it added.The arrests were linked to "a network ... capturing and sending foreign fighters to join the ranks of the terrorist organization Daesh (Islamic State) in the Syrian-Iraq region that it controls," the ministry statement said.Only days before that, a 26-year-old Moroccan man was accused of attacking passengers on a train in France, armed with a Kalashnikov, an assault rifle and a box cutter knife.Spain and other countries in Europe and north Africa have said they are alarmed about the risk of locals joining militants abroad and returning to launch attacks at home.On March 11, 2004, Islamic extremists detonated a bomb on a train in Madrid, killing 191 people. Reuters contributed to this report.