By REUTERS
AUGUST 24, 2016 09:24
Turkey launches offensive in Syria
Advertisement
ISTANBUL/KARKAMIS, Turkey, - Turkish special forces, tanks and jets backed by planes from the US-led coalition launched their first coordinated offensive into Syria on Wednesday to try to drive Islamic State from the border and prevent further gains by Kurdish militia fighters.Turkish tank units and Syrian rebels backed by the NATO member crossed into northern Syria to push Islamic State out of the border town of Jarablus, military sources said. A Reuters reporter at the border counted six Turkish tanks inside Syria and witnessed intense bombardments.Turkey's President Tayyip Erdogan said the operation was targeting Islamic State and the Kurdish PYD party, whose gains in northern Syria have alarmed Turkey. Ankara views the PYD as an extension of Kurdish militants fighting an insurgency on its own soil, putting it at odds with Washington, which sees the group as an ally in the fight against Islamic State."This morning at 4 a.m. (0100 GMT) an operation started in northern Syria against terror groups which constantly threaten our country, like Daesh (Islamic State) and the PYD," Erdogan said in a speech in Ankara.US Vice President Joe Biden arrived in Turkey hours after operations began on a pre-planned trip, the most senior US official to visit since a failed July 15 coup shook confidence in Turkey's ability to step up the fight against Islamic State."Euphrates Shield," named after the river running nearby, is Turkey's first major military operation since the abortive coup.A senior administration official traveling with Biden said the United States wanted to help Turkey to get Islamic State away from the border, and was providing air cover and "syncing up" with the Turks on their plans for Jarablus. He said the shelling was hitting Islamic State, not Kurdish forces. 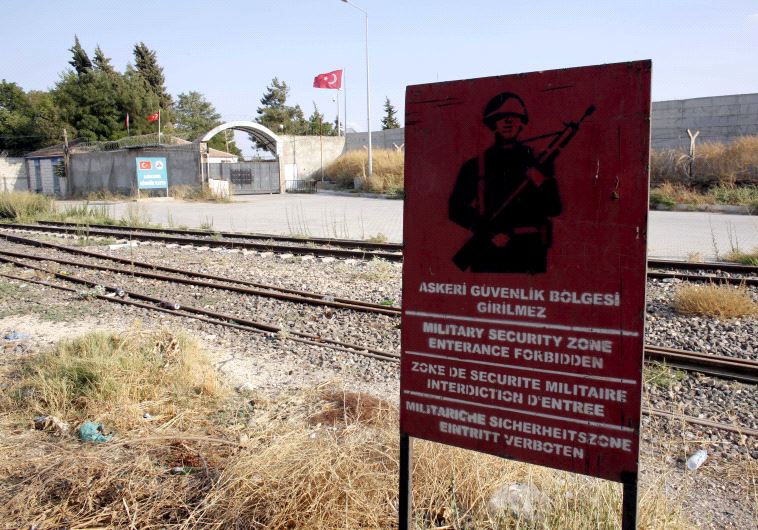 A Turkish military warning sign, with the closed Karkamis border gate in the background, is pictured in Karkamis, bordering with the Islamic State-held Syrian town of Jarablus, in Gaziantep province, TurkeyCUTTING ISLAMIC STATE ARTERYThe Turkish army began firing artillery rounds into Jarablus at around 0100 GMT and Turkish and US. warplanes pounded Islamic State targets with air strikes.It was the first time warplanes from Turkey have struck in Syria since November, when Turkey downed a Russian warplane near the border, and the first significant incursion by Turkish special forces since a brief operation to relocate the tomb of Suleyman Shah, a revered Ottoman figure, in February 2015.Turkey and the United States hope that by removing Islamic State from the border, they can deprive it of a smuggling route which long saw its ranks swollen with foreign fighters and its coffers boosted by illicit trade.The operation comes four days after a suicide bomber suspected of links to the group killed 54 people at a wedding in the southeastern city of Gaziantep.But for Turkey, it also preempts any attempt by Syrian Kurdish militia fighters, who play a critical part of the US-backed campaign against Islamic State, to take Jarablus.Kurdish fighters have captured large areas of territory since the start of the Syrian conflict in 2011, and Ankara has long declared the Euphrates river, which runs just east of Jarablus, a red line which it does not want them to cross.Foreign Minister Mevlut Cavusoglu said Kurdish fighters must return east of the Euphrates or Turkey would "do what is necessary."ENTERING A "QUAGMIRE"White and grey plumes of smoke rose from the rolling hills around Jarablus, visible from the Turkish town of Karkamis across the border. The boom of artillery rounds was audible as advancing Turkish tanks opened fire.Turkish military sources said the air strikes had hit 12 Islamic State targets, while artillery fire hit 70 targets."The aim of the operation is to ensure border security and Syria's territorial integrity while supporting the US-led coalition against Islamic State," one military source said, adding work to open a passage for ground forces was under way.Erdogan said Turkey was determined that Syria should retain its territorial integrity and would take matters into its own hands if required to ensure that was the case.But Saleh Muslim, head of the Kurdish PYD, wrote in a tweet that Turkey was entering a "quagmire" in Syria and faced defeat there like Islamic State.Kurdish groups already control swathes of northern Syria where they have established de facto autonomy since the start of the Syria war. The YPG, the armed wing of the PYD, took near complete control of Hasaka city on Tuesday, around 250 km (155 miles) east of Jarablus.That growing Kurdish influence has alarmed Ankara, which is fighting its own insurgency with militants from the outlawed Kurdistan Workers Party (PKK), blamed by the government for an escalation of attacks in the southeast of Turkey.The US-backed Syria Democratic Forces alliance (SDF), which includes the YPG, captured the city of Manbij, just south of Jarablus, from Islamic State earlier this month.The US official acknowledged that Turkey had not been happy about the Manbij operation but said Washington had underlined the Kurds would pull back once the city was cleared - which he said could take several weeks - and that they would not move further north, addressing a major Turkish concern."We've put a lid on the Kurds moving north, or at least doing so if they want any support from us," he said.POST-COUP OPERATIONTurkey had vowed on Monday to "completely cleanse" Islamic State militants from its border region after the Gaziantep bombing. Operation "Euphrates Shield" also comes after at least 10 mortar shells from Jarablus landed in Karkamis and the surrounding areas in recent days, forcing residents to flee.Syrian rebels backed by Turkey had said they were in the final stages of preparing an assault from Turkish territory on Jarablus. A Syrian rebel with one of the Turkey-backed groups said earlier on Wednesday around 1,500 fighters had been gathered at a location in Turkey to take part.It is Turkey's first major military operation since the failed July coup by rogue solders who tried to overthrow Erdogan and the government, killing 240 people and triggering a purge of suspected coup supporters in the army and civil service.Angered by a perceived lack of Western sympathy over the coup, Turkey has chilled ties with Washington and the European Union while ending a diplomatic row with Russia and proposing more military cooperation with Moscow in fighting Islamic State.Those growing ties between Ankara and Moscow are worrying Turkey's Western allies.