Swiss federal authorities had put Geneva on a high security alert after getting a tip from foreign authorities about a suspected Islamic State cell in the region. 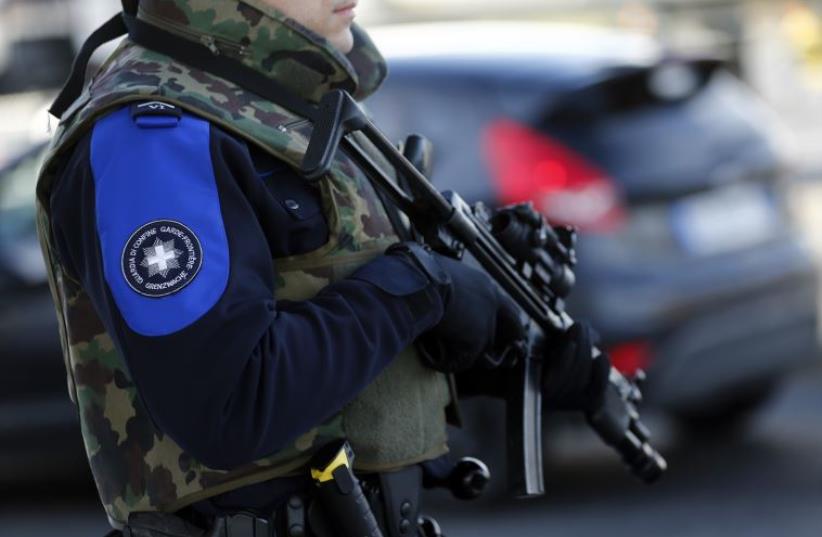 A heavily armed Swiss customs officer stands guard at the Swiss-French customs post of Bardonnex near Geneva, Switzerland December 11, 2015.
(photo credit: DENIS BALIBOUSE / REUTERS)
Advertisement
GENEVA - Two Syrian nationals were arrested in Geneva on Friday and traces of explosives were found in their car, the local newspaper Tribune de Geneve and Swiss television said.The newspaper gave no details on the identity of the two men or the circumstances of their arrest. It said it was unclear whether the arrests were linked to a heightened security alert Geneva authorities had declared on Thursday. It remained in effect at level 3 on a scale of 5."Two men of Syrian origin were arrested in Geneva on Friday," Swiss television said on its nightly news broadcast. "Traces of explosives were found in their car."Geneva officials were not immediately available to comment, but a source close to the case told Reuters that two men had been arrested, without giving any details.Swiss media and Reuters have reported that authorities are looking for four men believed to have been in Geneva this week. A van with Belgian plates and two men entered Switzerland from France via the Jura mountains on Tuesday and went back to France after three few hours, Swiss television said.Earlier on Friday, Swiss President Simonetta Sommaruga said that Swiss federal authorities had put Geneva on a high security alert this week after getting a tip from foreign authorities about a suspected Islamic State cell in the region.Two sources confirmed to Reuters that the Central Intelligence Agency had provided a photo of four men to Swiss authorities on Wednesday, saying they could be on Swiss territory.The photo, published in Swiss newspapers, showed four bearded men seated, with their faces blurred and index fingers raised in the air. A CIA spokesman in Washington declined to comment on Thursday.