Was the Istanbul attack an act of retaliation for Turkey-Israel accord? 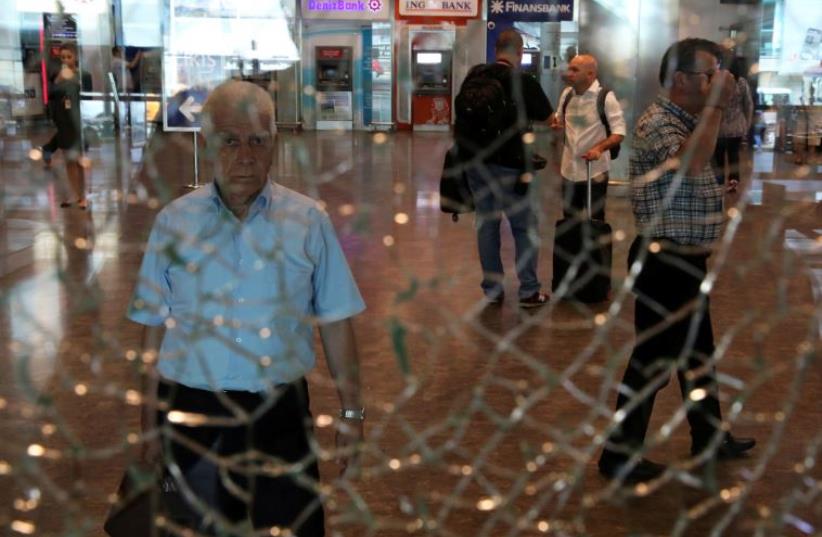 A man looks at a broken glass at Istanbul Ataturk airport, Turkey, following yesterday's blast June 29, 2016.
(photo credit: REUTERS)
Advertisement
Tuesday’s suspected ISIS attack on the Atatürk Airport was likely preplanned and unrelated to the rapprochement between Turkey and Israel and Russia, a senior Turkish official and other terrorism experts told The Jerusalem Post Wednesday.However, there is evidence Islamic State was angry about the repairing of relations between Turkey, Israel and Russia, publishing a statement in the latest edition of its official newsletter.A senior Turkish official told the Post “the main reason behind the Islamic State attacks is Turkey’s role in the international coalition [against the group].”Asked if the attack could be meant as a response to Turkey’s diplomatic moves to repair relations with Israel and Russia, he responded, “An attack of this scale takes planning. But we are not ruling out the fact that the terrorists may have picked this date to challenge Turkey’s diplomatic efforts.”Rafael Green, director of the Jihad and Terrorism Threat Monitor of MEMRI (the Middle East Media Research Institute), told the Post, “It is very unlikely the deal with Israel had anything to do with it.”“As in the past, Islamic State does not claim responsibility for attacks in Turkey,” he added.Islamic State criticism of President Recep Tayyip Erdogan, which is similar criticism that came from al-Qaida and others, may point to a motive being Turkey’s support for Free Syrian Army and other Islamist factions in Syria.The Jihad and Terrorism Threat Monitor found a statement in Islamic State’s official newsletter Al-Naba published on Tuesday saying that “The tyrant Erdogan renews ties with the Jews’ state and begs for Putin’s favor...”Ege Seckin, senior analyst at IHS Jane’s Country Risk, said that the attack most likely sought “to undermine the Turkish economy by attacking the airport ahead of the summer months, when tourism peaks.”“The capability of the Islamic State and similar Sunni militant groups in Turkey is likely to continue to expand so long as Turkey permits domestic political Islamism to grow unchecked.“Turkey’s reconciliation with Israel, announced on 27 June, will help reinforce the Islamic State’s narrative that ‘apostate’ governments of Muslim majority countries are aligned with ‘Jews, Crusaders and unbelievers’ against the true Islam it claims to represent,” said Seckin.Dina Lisnyansky, an Islamic terrorism expert and consultant from Bar-Ilan University, said that Islamic State has been using Turkey airports as one of the main ways of ferrying fighters and personnel to and from Syria and Iraq.“Turkey is unable to control” the flow of Islamic State personnel through the country, she asserted.Lisnyansky does not see the motive of the attack as specifically targeting Turkey, but against the third busiest airport in Europe as a kind of “showoff” attention seeking attack.She ruled out Kurdish responsibility since they favor targeting government facilities or members of the security forces.“The attack could have occurred anywhere, but it happened in the Turkish airport because it was possible. Islamic State doesn’t see anyone as ideological allies and views anyone who is not an Islamic State member as a target.”“It is part of the group’s radical division of the world into “righteous and Islamic” and to “the others” who are heretics and infidels, and therefore can be targeted during terror attacks, which Islamic State regards as rightful jihadi actions.”Lisnyansky also teaches at the Hebrew University of Jerusalem, and is a co-founder of the Petah Tikva-based Israeli Center for Russian and Eurasian Studies. She has been consulted by French officials.ISIS is being slowly rolled back on the battlefield and is losing territory, which is pushing the group to focus more on terrorist attacks abroad.“The irony is that the more the organization becomes weaker in its home base, the more they try to export terror,” said the terrorism expert.Remarking on the lack of security at Istanbul Atatürk Airport, she said she has frequently flown there, adding that once she had a connecting flight and they did not check any of her hand baggage.After the ISIS attack in the Brussels airport in March, Lisnyansky had told the Post she had visited “the Brussels airport many times in the past year, and it lacks security just like most other European airports.”“Nothing has changed since the Paris attack, and Brussels airport is just as insecure as Charles de Gaulle,” she had said.