The Uzbeki national is shown weeping and embracing his fellow fundamentalists goodbye before driving an armored vehicle packed with explosives into a nearby village. 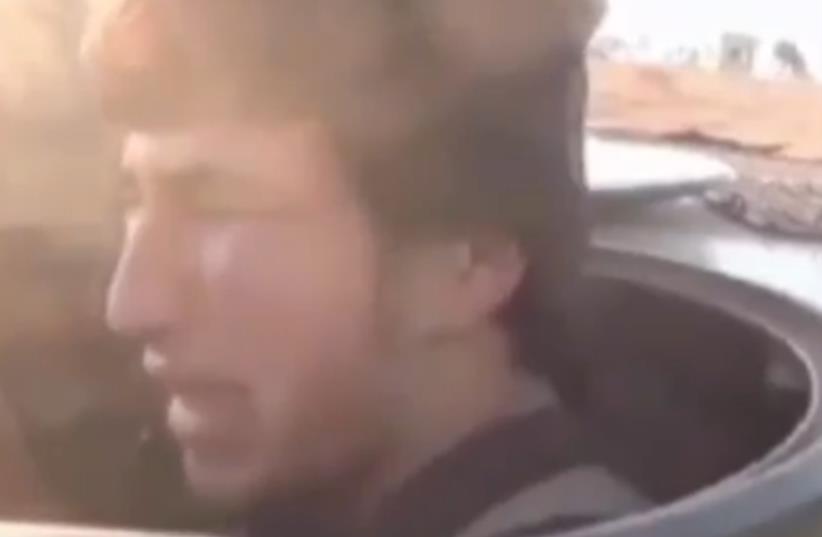 Jihadi shown crying right before conducting suicide mission
(photo credit: YOUTUBE SCREENSHOT)
Advertisement
Footage has emerged of a young jihadi militant fighting in Syria showing his final moments before reluctantly conducting a suicide attack in a nearby village, the British daily publication Daily Mail reported Thursday.
Uzbeki national Jafar al-Tayyar can be seen crying as he hugs his fellow extremists goodbye after leaders in the Uzbek-led Imam Bukhari Jamaat militant group, an affiliate of the infamous al-Nusra Front, order the scared operative to climb into an armored vehicle packed with explosives and drive it into the besieged villages of Fua and Kafriyeh."I'm just scared I won't succeed," Tayyar weeps to his fellow fundamentalists.At the end of the two minute video, viewers can see a large explosion, fire rising high into the sky, as al-Tayyar's fellow jihadis storm the village's defenses, Daily Mail adds.Tayyar's suicide attack was part of a larger mission that took place last Friday, which included over 200 rocket attacks and another seven suicide missions in all against the village of Fau, the Times of London reports.The main actor behind the siege was al-Qaida's Syrian affiliate Jabhat al-Nusra, also known as Nusra Front.Nusra Front later put out a statement, boasting of their assault on the villages, and circulating drone video footage showing the devastating impact of their attack.A ceasefire has since silenced fighting in the area, Daily Mail reports.