Iraqi officials say they will retake Mosul this year, the city which is by far the largest population center controlled by the jihadists. 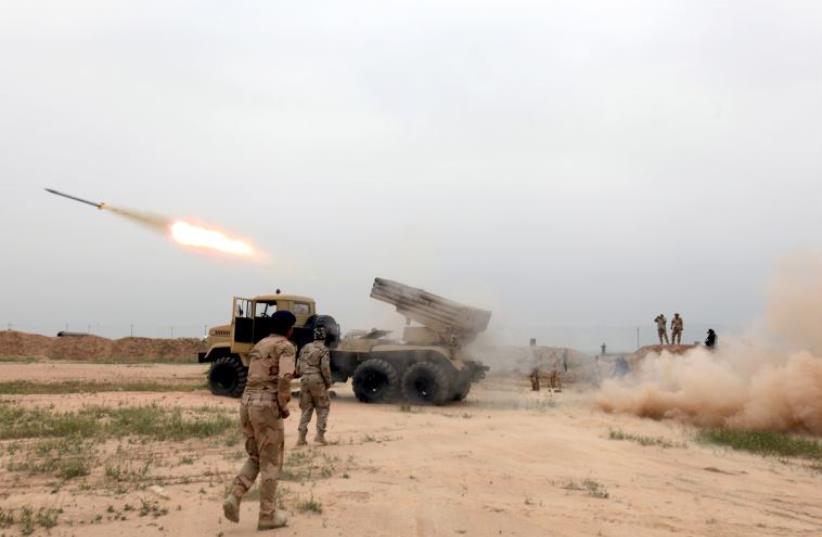 Iraqi soldiers fire a rocket toward Islamic State militants on the outskirt of the Makhmour south of Mosul, Iraq, March 25, 2016
(photo credit: REUTERS)
Advertisement
ANKARA - Aircraft from a US-led coalition on Monday destroyed the Turkish consulate compound in Mosul in northern Iraq which has been occupied by Islamist State militants since June 2014, the Turkish foreign ministry said.It said in a written statement that Turkey's views had been sought and its approval given for the air strikes, which were carried out at 3 a.m.The United States Department of Defense released video on Saturday that is said to show coalition airstrikes on Islamic State targets in Iraq.
US, allies conduct airstrikes against Islamic State headquarters in Mosul
The video purports to show strikes in Mosul that hit an Islamic State headquarters in the President's administration building at Mosul University, according to a US Department of Defense.Backed by air power from the US-led coalition of Western and Arab states, and by the peshmerga, thousands of Iraqi troops have deployed to the north in recent weeks, setting up base alongside the Kurdish peshmerga and US forces in Makhmour, which is set to be a key launchpad for any future offensive on Mosul, around 60 km north.Iraqi officials say they will retake Mosul this year, the city which is by far the largest population center controlled by the jihadists.