The radical preacher wrote a post on Facebook Monday announcing that he renounces Jerusalem's affiliation with the Iranian Revolutionary Guards' Quds Force. 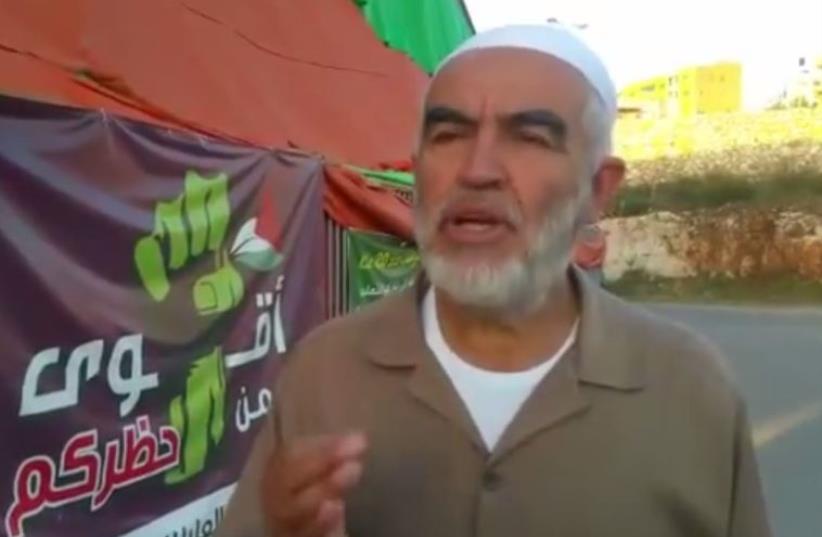 Raed Salah urgent call to save al-Aksa
(photo credit: screenshot)
Advertisement
Sheikh Raed Salah, the jailed leader of the extremist Northern Branch of the Islamic Movement in Israel, has lashed out at Iran's Quds Force for corrupting Jerusalem's name by slaughtering Syrians in the name of the holy city.“Al-Quds,” or the sacred, is the name used by Muslims for Jerusalem. The Quds Force is a special unit of the Iranian Revolutionary Guards which is tasked with carrying out Iran’s military actions abroad, including in the Syrian civil war.The radical preacher wrote a post on Facebook Monday announcing that he renounces Jerusalem's affiliation with the Iranian Revolutionary Guards' Quds Force."From my cell at the Ramon Prison in the Negev, I announce the disassociation of Jerusalem from the Iranian military Quds Force which has been slaughtering our people in Syria, and especially in Aleppo," Salah stated."In the name of Jerusalem, I emphasize that its transcendent name cannot be used by criminals who wish to legalize their crimes, such as the Quds Force's criminals," Salah added.On Sunday, Salah started serving his nine-month jail sentence, following his conviction last March on charges of incitement. Although Salah is a chief of a national Palestinian movement within Israel, the entire Arab world was awash with reports on his entrance to Ramon Prison.Arab activists launched a social media campaign in solidarity with the sheikh under the hashtag: "We are all Raed Salah," in which Muslim clerics from all over the Arab world lauded the Islamic Movement leader.Salah’s Northern Branch of the Islamic Movement, which is tied to Hamas and the Muslim Brotherhood, was outlawed in November.Salah's criticism of Iran comes amid a wide Palestinian outcry against the atrocities committed by the Syrian regime and the Iranian militias in the northern Syrian city of Aleppo.On May 1, Izzat al-Risheq, a member of Hamas's political bureau, wrote a post on Facebook condemning the Syrian bombardments on Aleppo, thereby becoming the first senior Hamas leader to blast Syrian President Bashar Assad.