Israel Navy official: Russia is here to stay in the region

Israel Navy Chief of Staff Rear Admiral Dror Friedman tells Army Radio that the Russians appear to be setting down roots in the region. 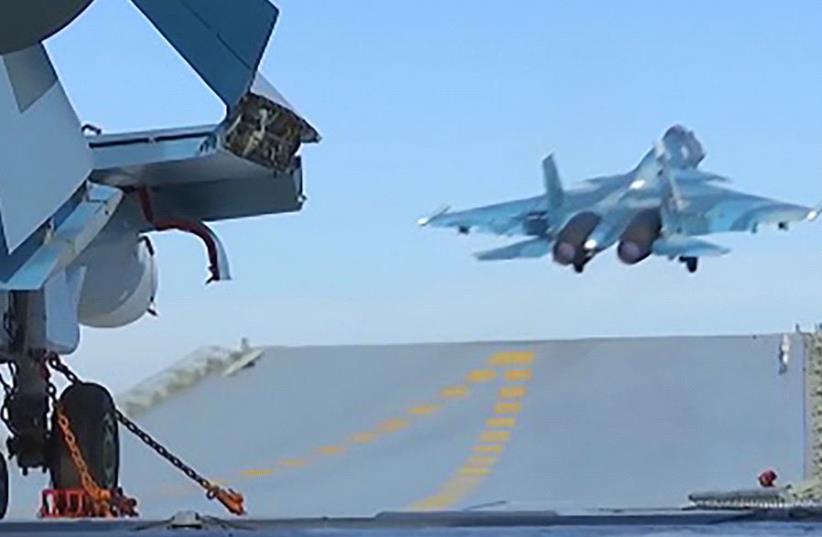 An image grab taken from a video footage made available on the Russian Defence Ministry's official website on November 15, 2016, reportedly shows a jet taking off from the Admiral Kuznetsov aircraft carrier in the eastern Mediterranean off the Syrian coast during a strike against Islamic State (IS)
(photo credit: HO / RUSSIAN DEFENCE MINISTRY / AFP)
Advertisement
The scope of Russia's military preparations in the region suggest that Moscow is planning to stay in Israel's neighborhood for the long term, Israel Navy Chief of Staff Rear Admiral Dror Friedman told Army Radio in an interview aired Wednesday."You see their activities in the field and you see them putting down roots, you see their activities in the Port of Tartus and you understand that this isn't the activity of someone who is planning to pack their bags and leave tomorrow morning," Friedman said of Russia's presence in Syria."You can see this through the amount of weaponry, the equipment they are bringing, the bases they are building. You understand that they are thinking long term," he added.
US slams Russian "barbarism" in Syria
Friedman said that the Russian military presence in Syria changes the way that the Navy operates in the area. "There have been instances in which we assessed the situation and changed or chose not to carry out operations," he said. Friedman suggested that the Navy would not want a situation in which certain of its abilities were revealed to the Russians through its operations.He said that the Russians stationing of the Admiral Kuznetsoz aircraft carrier in the Mediterranean off the coast of Syria was also something that the Navy had to account for. "When such a force is stationed here, our behavior changes," Friedman said.