Investigators: IDF troops acted in accordance with rules of engagement after Alaa el-Deen Za'eiter posed "clear danger" to their lives. 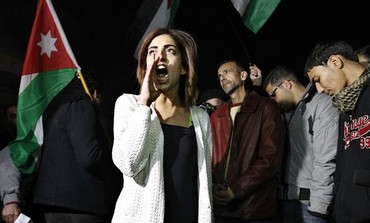 (Demonstrators in Jordan denounce Israel near the Israeli embassy in Amman. Reuters)The Palestinian judge who was shot and killed by IDF soldiers near the Allenby Bridge crossing between Israel and Jordan on Monday had shouted "Allahu akhbar" ("God is great" in Arabic) while charging at troops manning the terminal just moments before his death, an initial inquiry by Israeli security services revealed.According to a joint probe launched by the Israel Police and the Shin Bet (Israel Security Service), Raed Alaa el-Deen Za'eiter, the Nablus-born jurist with Jordanian citizenship, attempted to snatch the rifle of one of the soldiers. Feeling their lives to be in danger, the soldiers acted in accordance with the rules of engagement and fired at the man's legs. Za'eiter then continued attacking the soldiers with a metal pole before he was shot again, this time succumbing to his wounds. Investigators have so far determined that the soldiers acted properly given that Za'eiter "posed a clear danger" to their lives. The army said it is continuing the investigation.After Jordan threatened to take "firm measures" against Israel in retaliation for Monday's incident, Israeli authorities pledged to keep the Jordanians updated on any new developments in the investigation.Israel is working feverishly behind the scenes through diplomatic channels in a bid to ease tensions with Jordan. The shooting unleashed an outpouring of anger in the Hashemite Kingdom, with protesters congregating outside of the Israeli embassy in Amman demanding an abrogation to the 1994 peace treaty signed between the erstwhile enemies.A Jordanian government minister is quoted by the Chinese news wire agency Xinhua as saying on Monday that Amman is anxiously awaiting the results of an Israeli inquiry into the incident."We are following up the investigation," said Mohammad Momani, Jordan's minister of state for media affairs. "When we get the results we will announce firm measures. We also take measures against those involved in the killing of the judge."Jordanian lawmakers demanded on Tuesday that the government resign over the incident. Khaled Baqr, a member of Jordan's parliament, told the liberal daily newspaper Al-Ghad that Israel was guilty of a "barbaric crime" and that "nobody should underestimate the winds blowing on the Jordanian street."Israel Radio is reporting that Jordanian media outlets have included in their stories the IDF's claim that the shooting took place in self-defense after the judge sought to grab a soldier's weapon.The judge's family, meanwhile, is rejecting the army's claims, which are tantamount to "cheap excuses for murder."Meanwhile, MK Ahmed Tibi (Ta'al) is demanding that the IDF release video of the incident which he says was captured on the closed-circuit television system installed at the Allenby crossing, according to Israel Radio.Tibi says that the shooting ensued following a verbal altercation that erupted between the judge and one of the Israeli security personnel manning the crossing, and that murder charges should be pursued.