"We are at a critical point today," Shalom told Army Radio. "Israel is trying to renew the peace process, but the Palestinians refuse any direct contact with us."Shalom said he would request from the international community to isolate a Palestinian government where Hamas shares the reins. "I am going to petition the international community not to speak with a [unity] government that includes Hamas," Shalom said. The Likud MK's comments echoed those made by Prime Minister Binyamin Netanyahu's spokesman Mark Regev on Thursday, who said that “the closer Abbas gets to Hamas, the further away he gets from peace.”

Still, diplomatic officials in Jerusalem, especially those within Netanyahu's political camp, said they believed that any progress in the reconciliation between Fatah and Hamas is more show than reality, according to Army Radio Friday.

On Thursday Palestinian Authority President Mahmoud Abbas and Hamas leader Khaled Mashaal announced that they had agreed to work as “partners,” but failed to reach agreement over the formation of a Palestinian unity government.They did agree, however, to hold presidential and parliamentary elections in May and to release each other’s detainees from their prisons.The two men are to meet again on December 22.Khaled Abu Toameh and Herb Keinon contributed to this report. 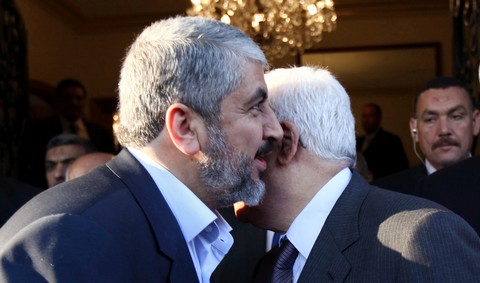