"This was a win for jihadists and other anti-US forces. It fuels the belief out there that Americans are anti-Islam." 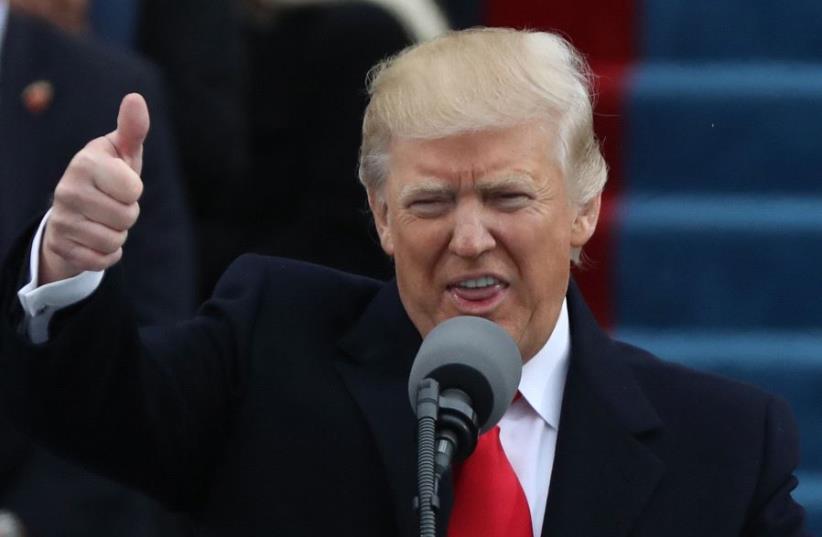 Newly inaugurated US President Donald Trump gives a thumbs up as he begins his inaugural address during ceremonies swearing him in as the 45th president of the United States on the West front of the U.S. Capitol in Washington, U.S., January 20, 2017
(photo credit: REUTERS)
Advertisement
Global jihadist groups celebrated US President Donald Trump's recent ban on travel from seven majority-Muslim nations, . The ban, extremists said, supported their perspective that Islam and the United States are at war.On pro-ISIS social media accounts, jihadists speculated that the ban would convince Muslim Americans to become extremists, hailed Trump as "the best caller to Islam" and predicted that Trump would start a new war in the Middle East.One poster called Trump's order a "blessed ban," and compared it to America's "blessed invasion" of Iraq in 2003, as it "ignited anti-Western fervor across the Islamic world."According to the Post, Islamic State has frequently spoken of their desire to launch terrorist attacks in order to "provoke anti-Muslim backlash that would force ambivalent Muslims to enlist with them."
Iraqi family"s dream to go to the US is dashed after Trump immigration ban, Jan. 29, 2017 (credit: REUTERS)
US Senator John McCain spoke to CBS on Sunday about the ban, saying "The effect will probably in some areas give ISIS some more propaganda," and said he was concerned that the ban may impact Muslims fighting in cooperation with Americans against ISIS in Syria and Iraq."This was a win for jihadists and other anti-US forces," CIA veteran Robert Richer told the Post. "It fuels the belief out there that Americans are anti-Islam. Otherwise, it accomplishes nothing, because the ones we are most concerned about can still get to the United States."Trump, who successfully tapped into American fears about terror attacks during his campaign, had promised what he called "extreme vetting" of immigrants and refugees from areas the White House said the US Congress deemed to be high risk.He told reporters in the White House's Oval Office on Saturday that his order was "not a Muslim ban" and said the measures were long overdue.The Department of Homeland Security said about 375 travelers had been affected by the order, 109 of whom were in transit and were denied entry to the United States. Another 173 were stopped by airlines before boarding.The order "affects a minor portion of international travelers," the department said in a statement, saying the measures "inconvenienced" less than 1 percent of travelers.The new rules blindsided people in transit and families waiting for them, and caused havoc for businesses with employees holding passports from the targeted nations and colleges with international students.Reuters contributed to this report.