It was the largest number of people executed in one day in Jordan's recent history, according to a senior judicial source. 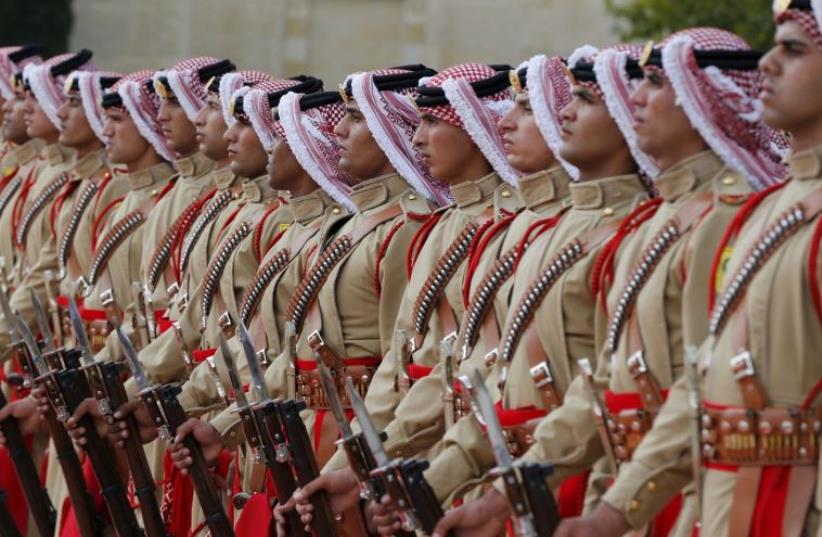 An honor guard marches at the Royal Palace in Amman, Jordan
(photo credit: REUTERS)
Advertisement
AMMAN - Jordan executed 15 people on Saturday including 10 convicted on terrorism charges ranging from an attack a decade ago on Western tourists to the slaying of a writer, a judicial source and the government spokesman Mohammad al Momani said on Saturday.Al Momani said those executed included one man who was convicted of an attack last year on an intelligence compound that killed five security personnel.Another five were involved in an assault by security forces on a militant hideout in Irbid city in the same year that led to the death of seven militants and one police officer, while the rest related to separate incidents that go back as far as 2003.It was the largest number of people executed in one day in Jordan's recent history, according to a senior judicial source.Human rights group Amnesty International condemned the executions by hanging saying they were carried out in "secrecy and without transparency.""The scale of today's mass executions is shocking and it's a big step backwards on human rights protection in Jordan," Samah Hadid, deputy director of Amnesty International's Beirut regional office, told Reuters.Hadid said the death penalty was "problematic because in some cases confessions in Jordan were extracted under torture or duress," echoing widespread complaints by human rights activists.Amnesty said in a statement earlier; "Jordan had for years been a leading example in a region where recourse to the death penalty is all too frequent."Jordan in the past refrained from executing political detainees and either reduced or suspended death sentences handed to fundamentalist Islamists on terror-related charges.International human rights activists say militants are put on trial in military courts that are unconstitutional and lack proper legal safeguards, adding that there are growing cases of mistreatment and of extracting confessions under duress.The government denies it tortures prisoners or mistreats detainees, saying its courts abide by human rights laws.A judicial source said the authorities also executed a gunman who last year shot dead outside a court a Christian writer who was standing trial for contempt of religion after sharing on social media a caricature insulting Islam.Also among the 10 was a gunman convicted of firing at a group of Western tourists near the Roman amphitheater in downtown Amman in 2006, killing one Briton and injuring five other people, the judicial source added.The five other executions were for rape and sexual assault.Jordan restored the death sentence by hanging in 2014 after a moratorium on capital punishment between 2006 and 2014.