By DANIEL K. EISENBUD
APRIL 21, 2014 21:23
The Dome of the Rock on the Temple Mount.
(photo credit: REUTERS)
Advertisement
Video: Israel Police
The Jordanian Foreign Ministry asked Israeli Ambassador Daniel Nevo on Monday to convey to Israel Jordan’s protest and rejection of recurring Israeli violations against the al-Aksa Mosque in Jerusalem, Jordan’s Petra news agency reported.Following clashes at the contested holy site this week, Amman told the Israeli ambassador that “assaulting Muslim worshipers and allowing [in] Jewish extremists” must stop and that Jordan holds Israel, as the “occupying power,” responsible for the security of the mosque and the Muslim worshipers there.The ministry warned Nevo that “such violations and attacks are tantamount to a flagrant violation of international law and the peace treaty between Jordan and Israel and constitute an extreme insult to bilateral relations,” Petra reported.In the latest round of violence on the Temple Mount, 24 Muslims were arrested Sunday morning for throwing rocks at police and an internationally celebrated US rabbi, lightly wounding two officers.According to police, dozens of Muslim youths threw stones at police and Rabbi Meir Soloveichik and his family upon reopening the holy site for the first time since it was closed Wednesday.Police used nonlethal stun grenades and tear gas to disperse the rioters, many of whom barricaded themselves in al-Aksa mosque, where officers are forbidden from entering.Soloveichik, a world-renowned American Bible scholar and descendant of the Soloveichik rabbinical dynasty – credited for founding the Modern Orthodoxy movement – was accompanied by Rabbi Chaim Richman, Temple Institute’s international director.Shortly after being ushered to safety, Soloveichik, who leads the Sephardi Congregation Shearith Israel in New York City, the oldest Jewish congregation in the US, issued a statement emphasizing the importance of Jewish prayer rights at the holy site.“Under the current circumstances, even to go to the Temple Mount for two minutes was a tremendous privilege,” he said. “It is critical for Jews to understand the importance of the Temple Mount.” 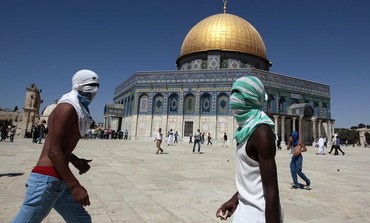 Soloveichik added that he is “very much in favor of ascending the Temple Mount according to Halacha, and after taking the appropriate halachic precautions,” and commended a growing legion of like-minded Jewish leaders.“I applaud the increasing number of Orthodox rabbis and heads of yeshivot that are going to the holy site, and I predict we will see even more Jews ascending in the future,” he said.In the statement, Richman said Soloveichik’s visit “sends a strong message to World Jewry that we cannot abandon our holiest site.”Echoing Soloveichik’s sentiments, he added that visits to the Temple Mount are “not only halachically acceptable, but are a halachic imperative for all Jews.”However, despite the two leaders’ contention that it is halachically acceptable for Jews to ascend the holy site, the Chief Rabbinate has banned Jews from visiting it since 1921 out of concern that they may inadvertently walk in an area forbidden by Jewish law, to all but those who are ritually pure.Indeed, in December Chief Rabbis David Lau and Yitzhak Yosef signed a declaration reiterating the Chief Rabbinate’s opposition to Jews visiting the Temple Mount, which was first issued by Rabbi Avraham Yitzhak Hacohen Kook.“In light of those neglecting this ruling, we once again warn that nothing has changed and this strict prohibition remains in effect for the entire area of the Temple Mount,” the chief rabbis wrote.The declaration, which was promoted and advanced by senior national-religious leader Rabbi Shlomo Aviner, was also signed by several other leading rabbis, including former chief rabbis Shlomo Amar and Bakshi Doron, Rabbi Tzvi Tau, dean of the haredi-Zionist Yeshiva Har Hamor.Nonetheless, in recent years, increasing numbers of religious leaders have ascended the site, largely spurred by the activities of several religious organizations that promote Jewish rights and Israeli sovereignty over the Temple Mount complex.Chief among them is the Temple Institute, an NGO dedicated to the biblical commandment of building a Holy Temple in Jerusalem. The Institute’s multi-disciplinary studies and outreach focus on the universal significance of the Holy Temple as a house of peace and prayer for all nations.Their activities have been given religious sanction by several leading national-religious rabbis, who rule that it is possible to visit the Temple Mount without entering the prohibited areas.Rabbi Dov Lior, the chief rabbi of Kiryat Shmona and Hebron and one of the most respected national- religious authorities in Jewish law, reiterated his position recently that it is halachically permissible to visit the Temple Mount.The increasing number of people visiting the site, compounded by a vocal campaign insisting on the right of Jews to visit and pray there, have led to increased tensions at the Temple Mount and intense political opposition from Arab MKs.Likud MK Moshe Feiglin ascended the Temple Mount Sunday and complained afterward that Jews’ access to the holy site was limited significantly despite the tradition of pilgrimages during the holiday.He said Israel’s police only permitted Jews in a narrow lane of a few meters and required them to leave after three minutes.“The Mount has practically been taken over by the Hamas and the Islamic Movement,” Feiglin said.“Because I wanted to cooperate with the police, who are between a rock and a hard place, I accepted such conditions. But this will be the last time I cooperate with such surrendering.”Jeremy Sharon and Gil Hoffman contributed to this report.