Long constrained by cultural and religious conservatism, women's soccer could make rapid advances in the Muslim world with the holding of the first female World Cup in the Middle East. 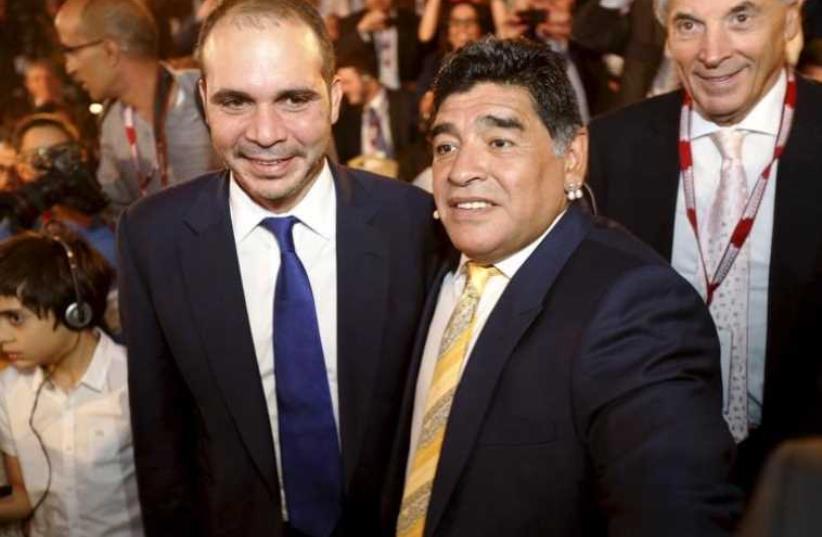 Jordan's Prince Ali Bin Al Hussein (L), FIFA presidential candidate, poses with Argentina's former soccer player Diego Maradona
(photo credit: REUTERS)
Advertisement
Long constrained by cultural and religious conservatism, women's soccer could make rapid advances in the Muslim world with the holding of the first female World Cup in the Middle East.Such is the expectation of Samar Nassar, the inspirational chief organizer of the 16-nation Women's Under-17 World Cup. Women from across the globe as well as in host country Jordan itself could win greater recognition and acceptance of a game proved to thrive in diverse cultures and even in adversity."It will not just benefit Jordanians but the thousands of Syrian girls, for example, living in refugee camps here like Zaatari where we are already providing support through the Asian Football Development Project (AFDP) and other bodies."FIFA, the international football federation, may be widely criticized for a clumsy bureaucracy and business practices, but awarding this tournament to Jordan sends a clear message of its commitment to the women's game and developing world."It is an amazing opportunity to have a World Cup coming to the heart of the Arab world," said Nassar, who swam for Jordan in both the 2000 Sydney Olympics and the 2004 Athens Games."It will help raise awareness of the women's game and its development across the region and beyond Asia and, while that might have been unthinkable 10 years ago, it has already created so many new opportunities for women.”"It is changing the mindset of a lot of people."The tournament, to be played in Jordan in October, 2016, consists of 32 matches played in four stadiums in Amman, and the nearby cities of Zarqa and Irbid. The Government has already put 20 million Jordanian dinars ($28 million) towards renovation of four stadiums with capacities of 12,000 and 13,000.The role of women in sport is controversial across the Middle East. Women are banned from public participation in sports in Saudi Arabia. In Iran women can play as long as they observe Islamic dress codes, but cannot enter stadiums reserved for men. In other states of the region, however, such as Jordan, women are free to play soccer.The AFDP, founded by outgoing FIFA vice-president Prince Ali Bin Al Hussein, the president of the Jordanian FA, has made a significant contribution to grassroots football in Asia including the Middle East.Prince Ali fought to lift FIFA's ban on women and girls playing organized football in their hijabs or headscarves, and that change has transformed the game's development among women in Muslim countries from the Middle East to the Far East."I don't think anyone should have been discriminated against because they wanted to wear a headdress, and getting that ban lifted was instrumental in pushing the women's game in the region," Nassar says."The change definitely allowed some women or girls who otherwise could not play, to play. When FIFA first banned it, it had a devastating affect on so many people. The ban being lifted has had a huge impact."While Nassar is not expecting the Jordanian Under-17 squad to go beyond the first round, success for her is measured in the cultural and social impact the tournament can have for women and girls.Nassar acknowledges a challenge in trying to convince a traditionally conservative society that women and girls playing football is not at odds with that society's religious, cultural and social mores."A lot of people here still don't know about women's football,” he said. They don't know a women's World Cup is coming to Jordan but women's participation in sports has increased a lot in the Arab world, and it is not just on the field, but with coaches, referees and administrators.”"We are taking our message to the community and hope the community accept it...But we believe they will. We don't just want the regular football crowd, we want women, children and families to be encouraged to come.”"You don't see a lot of women attending local matches in Jordan, and we want to change that mindset. We want people to support the women's game."