The Obama administration would abide by its pledge to deny Iran a nuclear weapon, Kerry told Channel 10. 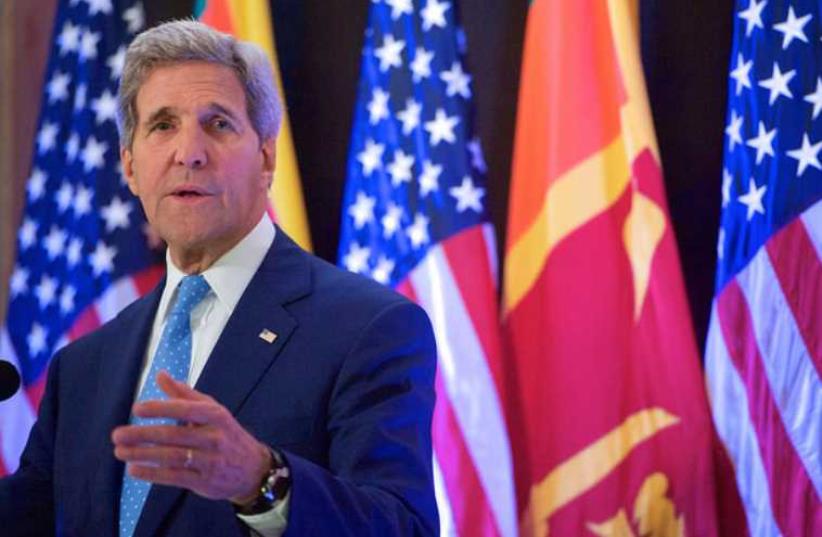 US Secretary of State John Kerry addresses the press in Sri Lanka
(photo credit: STATE DEPARTMENT PHOTO)
Advertisement
United States Secretary of State John Kerry appealed directly to the Israeli public on Saturday evening, telling Channel 10 that the Obama administration would abide by its pledge to deny Iran a nuclear weapon.“I say this again - we will not sign a deal that does not close off Iran's pathways to a bomb and that doesn't give us the confidence - to all of our experts and global experts - that we will be able to know what Iran is doing and prevent them from getting a nuclear weapon,” Kerry said.“President [Barack] Obama has absolutely pledged they will not get a nuclear weapon,” the secretary said. “I believe that where we are heading will in fact protect Israel.”Washington’s top diplomat said that the parameters of the emerging agreement in Iran would give the West access to key nuclear installations in the Islamic Republic - well beyond the 10- or 15-year period discussed as a possible shelf life of the deal.“We will have inspectors in there every single day,” Kerry said. “That’s not a 10-year deal. That’s forever. There have to be inspections.”“There’s a lot of hysteria about this deal,” the secretary of state said. “People really need to look at the facts, and they need to look at the science behind those facts.”The administration’s diplomatic efforts have been assailed by Republicans and hawkish Democrats who say Iran cannot be trusted to adhere to an agreement that places limits on its nuclear program.Florida Senator Marco Rubio, the Republican hawk who hopes to capture the GOP presidential nomination, insists on forcing Iran to recognize Israel as part of any nuclear deal between the Obama administration and the Islamic Republic, the online news magazine Politico reported on Thursday.Rubio’s uncompromising stance threatens to blow up the recently negotiated compromise between the White House and Congress whereby lawmakers would be permitted to review a deal concerning Iran's nuclear program.US President Barack Obama said earlier this month that the agreement was a "reasonable compromise" that would not derail talks with Tehran over its nuclear program.Obama told a White House news conference that Senate Foreign Relations Committee Chairman Senator Bob Corker and the panel's leading Democrat, Ben Cardin, had agreed they would protect the bill from "poison pill" amendments that would be tilted toward trying to kill an agreement with Iran.Now Rubio is insisting that lawmakers vote on a number of his amendments which Democrats believe will kill the compromise and invite an Obama veto.Aside from Iranian recognition of Israel, Rubio also wants the Tehran regime to unconditionally release all Americans held in Iran, the Obama administration to submit any UN resolutions to Congress for approval, and the economic sanctions regime to remain in place, according to Politico.Despite indications that the GOP leadership is on board with the proposed Rubio amendments, some Republicans are wary of the move since it threatens to undo progress made with Democrats over a bipartisan coalition that has forced the administration to back down from its previous position ruling out any Congressional say over the Iran deal.The influential American Israel Public Affairs Committee is pressuring lawmakers not to support amendments to toughen a bill that lets Congress review a nuclear agreement with Iran, hoping to avoid a partisan battle that could doom the legislation.