Kerry’s Cairo visit, Sisi’s speech and attempts by Netanyahu to bring the Labor party into the coalition has fueled speculation that a behind-the scenes US-Egyptian initiative might be in the works. 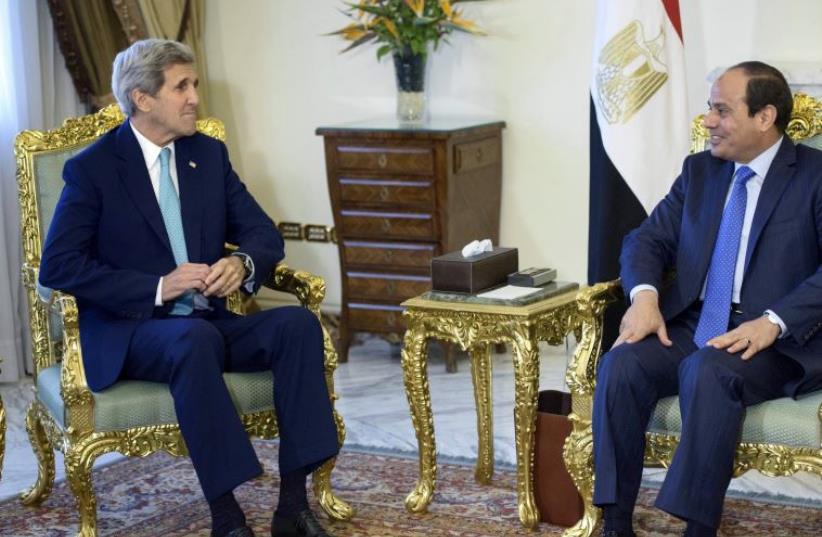 US Secretary of State John Kerry meets Egyptian President Abdel Fatah al-Sisi (file)
(photo credit: REUTERS)
Advertisement
Egypt is America’s strong regional partner, US Secretary of State John Kerry stressed while in Cairo to discuss ways to renew the frozen Middle East peace process.He arrived just one day after Egyptian President Abdel Fattah al-Sisi called on Israelis and Palestinians to take historic steps to end their conflict.Sisi’s emotional speech for peace on Tuesday was the first of its kind since he took office in 2014.Kerry’s brief visit fueled speculation that a behindthe- scenes US-Egyptian-led peace process with Israel and other regional partners was in the works, which would circumvent the highly publicized French initiative to end the Israeli-Palestinian conflict.“The secretary expressed his appreciation for the president’s recent statement of strong support for advancing Arab-Israeli peace,” deputy State Department spokesman Mark Toner said in Cairo.“Secretary Kerry also stressed the importance of Egypt’s role as a regional partner,” Toner added.Prime Minister Benjamin Netanyahu has in the past insisted that the only way forward is for the Israelis and Palestinians to hold direct talks. Still, he welcomed Sisi’s words. He also spoke by telephone on Tuesday with Kerry.It was their second such talk in the last week.One Egyptian source seemed pleased that Israelis are warming to the idea of regional talks when it comes to the Palestinians.In Washington on Wednesday, US State Department spokesman John Kirby said, “The Egyptians have floated some ideas they have about the Middle East peace process, and the secretary wanted to hear from Sisi about what these ideas are.“We are not going to turn away any good ideas or options or concepts and proposals that might merit further study,” Kirby said.But Israeli and Palestinian leadership must step forward if the process is to be resumed, Kirby said.“What we need to see from all sides is the kind of leadership demonstrated and shown that can help us get to the situation where meaningful discussions can be had,” Kirby said.The moment when those talks can be held has not yet occurred, he added.“What you are seeing is increasing concern by governments in and out of the region about what is going on. There is a genuine effort to help find a way through,” Kirby said.But he cautioned that it would be up to Israeli and Palestinian leadership to bring those efforts to fruition.Sisi’s speech on Tuesday came precisely as France appeared poised to launch an internationalized peace initiative this summer. Israel has opposed this initiative.The US, which has led all past Israeli-Palestinian peace efforts, including the nine-month process that fell apart in April 2014, has spoken generally of supporting peace efforts, but has yet to say whether it would specifically get behind the French proposal.The US had told the French a scheduling conflict would prevent Kerry from attending the opening meeting of the two-phase initiative, originally scheduled for May 30 in Paris.On Tuesday, French President Francois Hollande said the meeting had been rescheduled in hopes of accommodating Kerry’s schedule. But the US has yet to set a date with the French when they can hold a ministerial meeting on the peace process with ministers from over 20 countries.Separately, Netanyahu spoke by telephone on Tuesday with North Atlantic Treaty Organization Secretary-General Jens Stoltenberg. He thanked him for allowing Israel to open a mission at the NATO headquarters in Brussels. Israel hopes to become a member of the 28-nation body and new office is an upgrade in its status with NATO. Netanyahu also invited Stoltenberg to visit Israel.Reuters contributed to this report.