Washington is currently assembling information implicating Damascus in the use of chemical weapons, Kerry said. 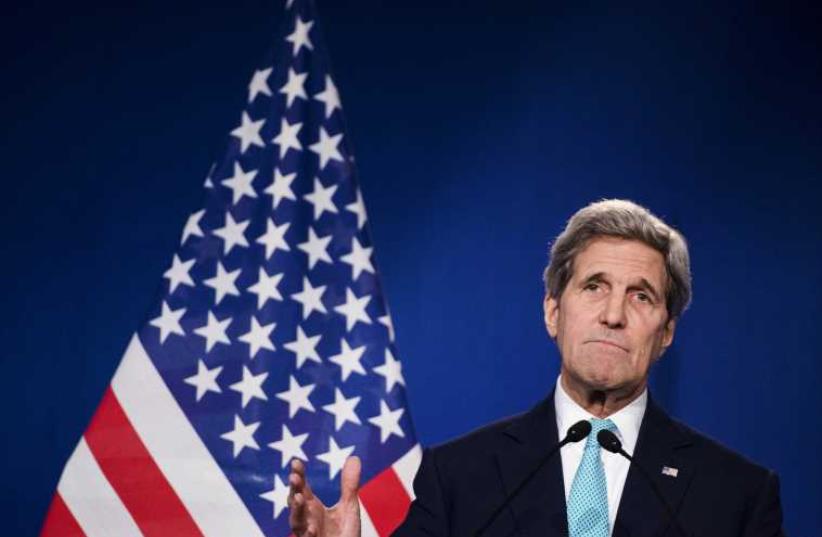 US Secretary of State John Kerry
(photo credit: REUTERS)
Advertisement
US Secretary of State John Kerry said on Tuesday he had discussed Syria's use of chemical weapons with Russia and the international community's patience with Syrian President Bashar Assad's behavior was wearing thin.Speaking to reporters via video conference from Boston, Kerry said he was confident Assad's government was responsible for a "preponderance" of chemical attacks against his own people and that "everyone's patience is wearing thin."Kerry said it was one of the issues he discussed with Russian Foreign Minister Sergei Lavrov by phone on Monday and was confident Lavrov would raise it with Assad, who agreed in 2013 under a US-Russia brokered deal to dismantle the country's chemical weapons arsenal.He said chemical weapons were dropped from aircraft and the United States was putting together data to support its claims that Assad's government was responsible for attacks.The UN Security Council is currently debating a draft resolution that will help determine who is responsible for using chlorine as a chemical weapon. Russia questions whether a resolution, being drafted by the United States, is needed.Kerry said it was possible that Syria's opposition may also have had access to chemical weapons "at one point in time or another," although he emphasized that rebel forces did not have access to aircraft or helicopters.Human rights groups have accused the Syrian government of launching barrel bombs from helicopters in Idlib province in the northwest.Although chlorine is not a prohibited substance, its use as a chemical weapon is prohibited under a 1977 Chemical Weapons Convention, which Syria joined in 2013."I'm confident that [Lavrov] will raise it with him yet again," said Kerry, adding: "I think everybody's patience is wearing thin with respect to the extraordinary depravity of the weaponry and mechanisms for delivery which Assad has used against his own people."Kerry said the United States was "engaged in a number of efforts right now, diplomatically and otherwise" to see whether Syria's conflict could be resolved through diplomacy.The United Nations says more than 200,000 people have been killed and millions displaced in the Syrian civil war since March 2011.